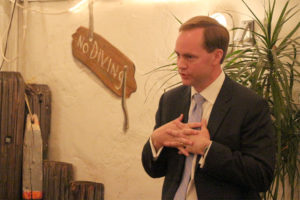 New County Board member John Vihstadt defeated Democrat Alan Howze by a 57-41 percent margin, becoming the first non-Democrat elected to the Board since 1999.

“The overriding conclusion of Democrats who campaigned long and hard was that voters were ticked off at what they perceived as ‘arrogrance’ by the County Board,” The Voice, written by Editor-in-Chief Warren L. Nelson and Deputy Editor Eric Wiener, said in a front page story. “What was most remarkable, however, was that this concern about arrogance was not just voiced by those who voted for John Vihstadt but by legions of voters who stuck by the Democratic candidate, Alan Howze.”

“The overriding issue of the special election was the proposed Columbia Pike streetcar,” the newsletter noted.

The Voice wrote that ACDC President Kip Malinosky addressed the local party’s Steering Committee and asked for assessments. The committee members, the Voice writes, “disagreed strongly” with the voters’ claims of Board arrogance, but “found it prevalent as they campaigned and talked with voters.”

“This election wasn’t about Alan or John or the ACDC,” one Steering Committee member wrote, “it was about the current ruling coalition on the County Board, and their aloofness, hubris and tone-deaf attitude toward their constituents.”

The newsletter also argued that Vihstadt may not be as much of an underdog in the upcoming November rematch against Howze as some Democrats like to think.

Many around the party argued that this was only a special election with a small voter turnout — the typical scenario where the GOP does well–and that things will be different in November. But that was not the view that prevailed among those party workers who were most active in contacting voters.

The turnout was large for a special election, a record, in fact. ACDC’s ground campaign effort was widely seen as very effective in getting out the Democratic vote. But as one campaigner said, “Many of them then voted for Vihstadt.”

The newsletter, released this week, comes on the heels of County Board member Libby Garvey, who supported and donated to Vihstadt’s campaign, resigning from the ACDC after Malinosky called for a hearing to potentially remove her.

Garvey spoke to ARLnow.com after she resigned, saying she hopes the party will become stronger in the long run after it “figures out what the real questions and issues are.”

“I’m not the problem,” she said after her resignation, “I’m a symptom.”