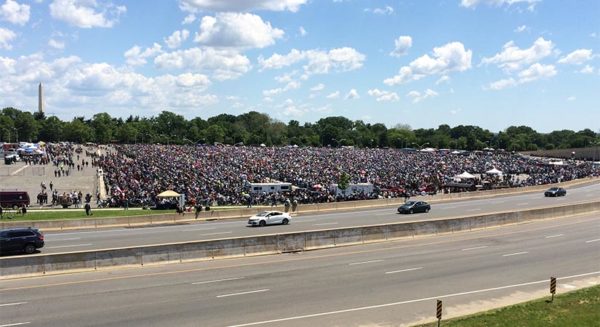 Firefighters Battle Three-Alarm Blaze — Firefighters from Fairfax County and Arlington battled a three alarm fire at a senior living community Friday night. The facility, Lockwood House, is located on the 600 block of N. Madison Street, just across the Arlington border in Fairfax County. The building’s nearly 100 apartments were evacuated as the fire spread from an electrical transformer to a utility room containing a diesel generator and fuel tanks. [WUSA 9]

Three More Schools to Get FLES — Updated at 1:45 p.m. — Three additional schools will be getting Arlington Public Schools’ Foreign Language in Elementary School program, starting this fall. Tuckahoe, Nottingham and Oakridge will be getting the program, which provides Spanish language education to elementary students. The program also eliminates early release Wednesdays at schools that have it. Parents have been pushing Arlington elected officials to fund FLES at all elementary schools; the school system is planning to do so, but over a period of a couple years. [InsideNova]

Beyer Endorsed By WaPo — Former Va. lieutenant governor Don Beyer has been endorsed by the Washington Post in the Democratic primary to decide who will be the party’s nominee to succeed Rep. Jim Moran in Congress. “Mr. Beyer is, simply, an excellent candidate,” the Post’s editorial board opines. “He would make a first-rate addition to this region’s unusually effective congressional delegation.” [Washington Post]

Business Soaring for Arlington Bird Seed Store — Business continues to grow for the 23-year-old Wild Birds Unlimited store at the Lee Harrison Shopping Center (2437 N. Harrison Street). This winter’s frigid temperatures actually resulted in a sales boom, as birds sought food sources that weren’t iced over and bird-watching customers sought seed in order to attract those birds to their backyards. The store — No. 66 of the chain’s nearly 300 stores in North America — recorded $800,000 in sales last year and is hoping to crack the $1 million mark soon. [Washington Business Journal]