Arlington Fire Chief Jim Schwartz on Tuesday presented the County Board with recommendations from the county’s latest fire station location study, and the results are not without controversy.

Tuesday was the first time the Board had received a detailed public rundown of results in the TriData report from December 2012. The report assessed Arlington’s need for emergency services and how needs have changed. The last assessment of Arlington’s fire response needs had been nearly 13 years prior.

“Communities on a regular basis need to assess where their fire stations are,” said Schwartz. “Communities change a great deal, this one certainly has in the last couple of decades.”

Schwartz explained that 60 percent of Arlington County Fire Department’s activity comes from emergency medical calls, 30 percent from fire or hazmat calls and 10 percent are non-emergency public service calls, such as stuck elevators. The sections of Arlington County producing the most calls consistently coincide with the most densely populated areas. Fire Station No. 5, near Crystal City, is currently the busiest in Arlington.

ACFD aims to respond to all fire calls within four minutes of being dispatched, and respond to medical calls within eight minutes. However, those goals are not being met in the northern portion of the county, Schwartz noted. He said there is no fire station located in the northernmost part of the county, which causes response times there to be longer than in areas with better station coverage.

“We have not been physically located where we can get to the northernmost portion of the county in four minutes. So that has been a long term goal of the department, to move a facility into an area that physically enables us to get there as quickly as possible,” said Schwartz.

The need to offer better coverage in the northern part of the county prompted a recommendation in the TriData report to move Station No. 8 from its position on Lee Highway in the Hall’s Hill/Highview neighborhood to county-owned land at Old Dominion Drive and 26th Street N., near Marymount University.

That proposal rankled members of the Old Dominion Civic Association, who say the county did not reach out and allow residents to give feedback. Several residents of that neighborhood believe the land on which the new station would be built should instead be preserved as park space.

“I will acknowledge the report recommended as better sites from a response perspective, Williamsburg Blvd at Glebe Road, and Rock Spring Road at Glebe Road. Both areas where there is a lot of private property that I do not envision us taking. And so we said, what’s the next best alternative, and they focused back on the recommendation of 26th and Old Dominion,” said Schwartz.

Several County Board members echoed the community concern over a lack of explanation for building a fire station at the proposed site.

“We do need more information,” said Board member Walter Tejada. “I guess the concern people feel, the reason is they have been surprised or blindsided by it. I’m hoping those questions will be answered so we can pass them on to our residents who want to know how did this come about.” 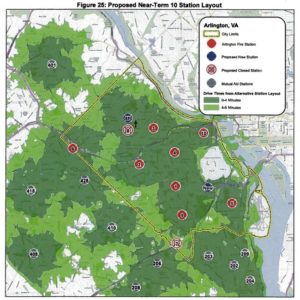 Tejada and Board chair Jay Fisette both mentioned that the proposal for a new fire station is part of a master plan, but the whole plan had not been presented to the public in its entirety. That, they say, is causing confusion and frustration.

“The community has not received this information, probably, in the most productive way at this point,” said Tejada.

Fisette said the county is hoping to begin the public process in January 2015, adding, “I’m sure we’ll figure something out, but the first thing is just to get there and explain what you’ve already explained to us, and give us all time to figure out what that next community effort looks like.”

Although the TriData report included recommendations for improving or relocating other stations, Schwartz said those are lower priority than getting better coverage in the northern portion of the county. Schwartz believes building a station in the north even is more important than adding additional coverage in Crystal City.

“I get more improvement in response time, we improve better our service to the community, by moving [Station] 8 first,” he said. “And the problem is, that if we don’t start moving on these, we’re going to find these station needs bunched up at one time.”

Another piece of the larger plan involves moving Arlington’s Emergency Operations Center from its current Courthouse building, which is slated to be demolished during the Courthouse Square revamp. One recommendation is to build the office above the new fire station.

“We have the need for physical space and need to go somewhere when Courthouse Square goes through,” said Schwartz. “We need to do something. So a consideration is to co-locate it with a fire station.”

Board members again reminded Chief Schwartz and County Manager Barbara Donnellan that residents first heard of this as a small portion of the 2015-2024 Capital Improvement Plan (CIP), and not as part of a larger, unified plan. Fisette said if residents had known the larger plan included a full community process later, they likely wouldn’t have been so upset. He believes residents should have been given a presentation about the overall strategy —  similar to what Schwartz presented to the County Board — prior to the TriData report release.

“It isn’t the first time people have heard it. But as it was more explicitly referenced in the CIP, we all would have benefited from just having had the opportunity to get your expertise out there to frame this conversation,” said Fisette.

Donnellan explained that much goes on behind the scenes to sort through major issues before full plans are presented to the public. She hesitated to prematurely release information from reports to the public. She alluded to improving the process as the plan proceeds.

“My hope is we can do much better in the coming weeks and months,” said Donnellan.

The TriData report made two additional near-term recommendations to improve fire and EMS response times around Arlington County that may prove unpopular with certain residents.

The report recommends closing Fire Station 7 in Fairlington. Though the “little house” only houses one engine and “is located in a residential community that has narrow streets and limited access,” it’s still considered a “neighborhood treasure.” TriData suggests that the Fairlington community would still be well-served by Fire Station 9, on S. Walter Reed Drive, should Fire Station 7 close.

While closing Station No. 7, TriData also recommends opening a new station, near the intersection of Columbia Pike and Washington Blvd. The location “improves coverage to the high-demand hotspot on the east side of the high-risk area of Columbia Pike,” which is “scheduled for additional development,” the report notes.