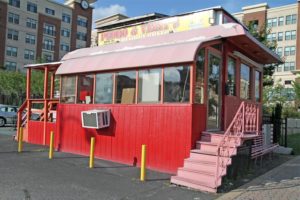 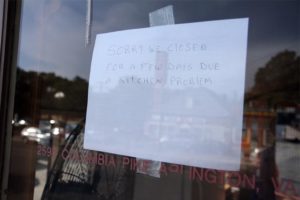 Pedro and Vinny’s, the popular burrito stand in the CVS parking lot at 2599 Columbia Pike, is closed indefinitely after having its health license revoked.

The restaurant opened in 2011 in what was once an Ollie’s Trolley. It has since served hungry Pike residents, Pentagon employees, and even members of Congress. Earlier this month it was included in the prestigious Five Thirty Eight Burrito Bracket.

The violations were mostly centered around improper food holding temperatures: the cheese and sour cream were too warm in the refrigerator and the chicken and beef were not hot enough in the countertop well, according to health inspection records. As part of the probation, the restaurant was informed that its food service license would be revoked if they were found not in compliance again, according to Larrick.

Last night, handwritten signs posted on the restaurant’s doors stated that it was “closed for a few days due [to] a kitchen problem.” Larrick said that Pedro and Vinny’s may submit an application for a new license, but will “need to meet all applicable requirements of… Arlington County Code” in order to receive it.