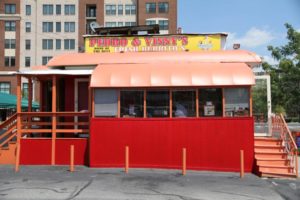 Pedro and Vinny’s, the tiny take-out burrito eatery at 2599 Columbia Pike, has some new friends in high places.

The restaurant had the rare privilege of catering a congressional event last week, thanks to a devoted fan: Rep. Joe Barton (R-Texas). Barton has a home in Arlington Heights, not too far from Pedro and Vinny’s, and has become a regular customer since it opened last summer.

When it recently came time for Barton to arrange the catering at a weekly lunch for Republican members of congress from Texas, he asked his staffers to approach the restaurant to see if they’d be up for the task. It would be tough to appease the discerning palates of the Texas lawmakers — whose lunch is usually catered by a rotation of larger, more established restaurants like Hill Country Barbecue and Tortilla Coast — but owner Roger Coroneo said he was up for the challenge.

Sean Brown, Rep. Barton’s press secretary, said the office was a bit worried about their “outside the box” choice of a caterer. After all, Pedro and Vinny’s is essentially housed in a glorified shack in the corner of a CVS parking lot. In the end, though, Coroneo and company delivered 30 freshly-made burritos to the halls of congress last Thursday — 10 chicken, 10 beef and 10 pork — and won over the crowd.

“We were a little nervous, but it actually went over really well from all reports,” Brown told ARLnow.com. “When it comes to food the members are not afraid to [voice] their pleasure or displeasure… And you know, in Texas we like to pride ourselves on knowing when we have a good burrito. ”

There’s now talk of Pedro and Vinny’s being added to the regular rotation of caterers for the Texas GOP delegation, perhaps even for larger events. Brown said the restaurant scored extra points by providing more than just tasty food.

“Their customer service is very good and they were very helpful every step of the way,” he said.