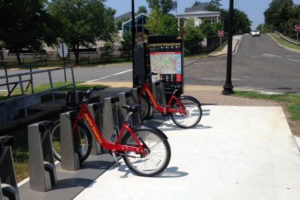 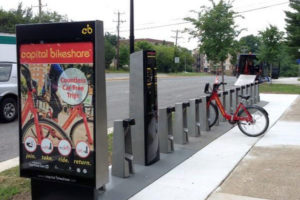 Two new Capital Bikeshare stations became available for public use yesterday in Arlington, and a new bicycle path shouldn’t be too far behind.

Capital Bikeshare announced on Twitter yesterday that it had installed a 15-dock station at Lee Highway and N. Cleveland Street in Lyon Village and an 11-dock station at the intersection of Arlington Blvd and N. George Mason Drive at the edge of the Buckingham neighborhood. The two stations are the fourth and the fifth to have opened in Arlington this year, according to Paul DeMaio, Arlington’s program manager for Capital Bikeshare.

“This makes 72 stations in Arlington and 323 in the region,” DeMaio told ARLnow.com in an email. “Thirteen stations are in planning with another 17 stations recently funded with the start of fiscal year 2015 this past July.”

DeMaio said Capital Bikeshare is on track to have 133 stations around Arlington by 2020. 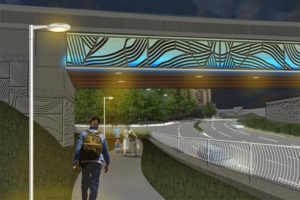 In other bicycle-related news, the shared-use path being constructed by the Virginia Department of Transportation as part of the Route 50/N. Courthouse Road/10th Street interchange project is projected to open next month, according to David Goodman, the county’s bicycle and pedestrian programs manager.

The trail will run along the highway’s eastbound side from the intersection with N. Pershing Drive, at the Fort Myer gate, to the N. Rolfe Street offramp.

On the other side of Route 50, the shared use path has been realigned and extended under the 10th Street bridge. These paths are expected to open when the construction on the project is complete, projected to be the end of August.