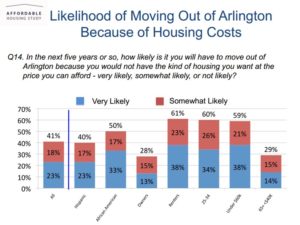 A majority of Arlington residents between the ages of 25 and 34 say they are likely to leave the county within five years because of the cost of housing, according to a county-sponsored survey.

According to the survey, which polled 1,744 Arlington residents, 60 percent of 25-34 year olds responded “somewhat likely” or “very likely” to the question: “In the next five years or so, how likely is it you will have to move out of Arlington because you would not have the kind of housing you want at the price you can afford?”

Thirty-four percent of respondents said it was “very likely” they would move away.

The survey is a component of the county’s ongoing affordable housing study, which launched in July 2012 and is being run by Arlington’s Affordable Housing Working Group. Michael Spotts, the vice chair of the working group, said the high cost of housing in Arlington is an impediment to those hoping to start families here.

“It was a little surprising to me,” Spotts, 30, said about the survey results, “but I think whether [current 25-34 year olds moving out of Arlington] will actually happen depends a lot on how consumer preferences change moving forward.

“I’m a millennial myself and my wife and I live in Arlington, and we bought a house in Arlington and are very happy here,” Spotts continued. “I think it was a little surprising, but given how expensive it is, especially as people get older and start a family, it’s not particularly surprising.”

According to the study, 39 percent of the 25-34 age range said they want to buy a home at some point in the future, and Arlington is out of their price range. The study also included the figures on which ARLnow.com reported earlier this week that suggested residents generally approve of the Arlington County Board’s affordable housing policies and priorities.

County Board Vice Chair Mary Hynes is the Board’s liaison to the working group, and she presented the survey to the Board last week. While Hynes said everyone is aware of the housing struggle in Arlington, even she was surprised that so many younger residents were planning to leave. 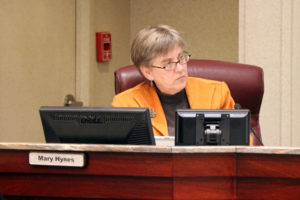 The same question about moving within five years, when asked to minority groups, received a lower but still high “likely” response.

Forty percent of Hispanic respondents and 50 percent of African Americans said they were somewhat or very likely to leave Arlington within five years due to housing costs. The lowest “likely” response came from current property owners, at 28 percent.

The region’s economic prosperity is generally viewed as the main factor that housing prices have escalated to the point where such a study is even worthwhile, but Spotts said Arlington may have inadvertently contributed to its own predicament.

“One of the things that a lot of people, generally speaking, would find surprising is that all of the things that go into the county that make it great are also things that can add cost to housing,” Spotts, who studies affordable housing policy as his career, said. “You want to protect your parkland and streams, and there’s a direct cost of those elements in terms of maintaining green space, but there’s also sort of an indirect cost. If you’re restricting some of the housing you can build because of other goals, then that drives up the cost of housing.”

“Reasonably priced housing options are essential for employers to be able to recruit and retain talent as is a strong transportation infrastructure,” Arlington Chamber of Commerce President and CEO Kate Roche said in an email. “As stated in our Public Policy positions, the Chamber encourages county officials to consider a lower real estate tax rate and/or other tax incentives in cases where such a rate would help preserve affordable housing, and seek legislative approval in Richmond as needed.”

The working group is made up of 18 members, including representatives from affordable housing developers, for-profit developers, and members of various Arlington boards and commissions. They will present a series of findings to the County Board in December after they complete Phase II of their study. The full, complete study is expected to be brought to the Board in June 2015 with a series of recommendations for future housing policies.

Hynes says she’s proud of what the county has already done on affordable housing, such as its pledge to use bonus density to create 6,200 affordable units along Columbia Pike, but says the work is far from over.

“We’re not resting on our laurels,” she said, “but I can’t tell you the next good idea because that’s part of what we’ve asked this group to do.”