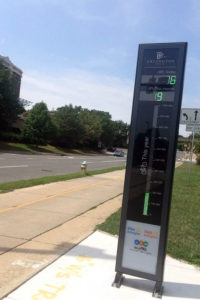 The bicycle counter on the Custis Trail in Rosslyn passed 200,000 trips earlier this month, a milestone for the first device of its kind on the East Coast.

As of last night, the counter was up to 204,899 trips since it was unveiled on April 1. There were 706 trips recorded today at 12:43 this afternoon, and 24,907 trips this month. The “Bikeometer” has been getting good reviews from the community, according to county Department of Environmental Services spokeswoman Shannon Whalen McDaniel.

“Many people have said that previously they had no idea how many other cyclists bike through Rosslyn,” she said. “County staff did not have a precise understanding of how many bicyclists were using the Custis Trail through the Rosslyn Circle area. With the installation of the Bikeometer counter and display we now know a lot more about the number of bicycle travelers on an average day, and how that number changes over the course of the year and by the day of the week. We’re also learning more about how factors such as weather can impact bicycle travel.”

The data should help the county as it designs safety improvements to the “Intersection of Doom” — where the trail, N. Lynn Street and the I-66 offramp combine in one of the most accident-prone intersections in the county, especially for cyclists and pedestrians. The improvements are in the design and engineering phase after being approved by the Arlington County Board in May, and construction is expected to begin next spring.

“Knowing the number of bicyclists and at what times they cross through the intersection is useful information in evaluating traffic signal timing at the nearby Lee Highway intersections,” McDaniel said. “We are currently evaluating if and how signal changes could be made to reduce bicycle and vehicle conflicts that occur at the trail crossing of Lee Highway and N. Lynn Street. Staff will also conduct a study of the feasibility of constructing an underpass or bypass of the Custis Trail at the Rosslyn Circle location.”