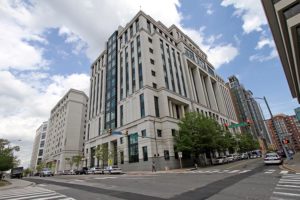 Update at 3:20 p.m. — The U.S. Supreme Court has issued a stay in the 4th Circuit Court of Appeals’ ruling striking down Virginia’s ban on same-sex marriage. Arlington will not be able to grant marriage licenses unless the Supreme Court either declines to take further action or considers and then upholds the ruling.

Update at 4:40 p.m. — Paul Ferguson has issued a statement: “I am disappointed with the Supreme Court’s decision but remain hopeful that the Fourth Circuit’s ruling will ultimately be upheld. Our office will be prepared to issue marriage licenses to same sex couples whenever that time comes.”

Earlier: Arlington officials are preparing to issue what could be the state’s first same sex marriage licenses tomorrow (Thursday).

Unless a stay is issued by the U.S. Supreme Court, Arlington Clerk of the Circuit Court Paul Ferguson says he will start taking applications and issuing licenses to same sex couples at 8:00 a.m.

The applications will be taken on the 6th floor of the Arlington County Courthouse (1425 N. Courthouse Road), but in light of the fact that cameras are not allowed inside the courthouse, Ferguson will also administer oaths outside.

“Since cameras are not allowed, I will administer oaths to those couples who want to be filmed/interviewed outside of the courthouse,” Ferguson told ARLnow.com today. “Also, there will be ministers and civil celebrants outside the courthouse ready to perform marriages for those who would like to get married immediately after receiving the license.”

Arlington County is expecting a large media presence for the event. From 7:30 to 9:00 a.m., the police department is planning to shut down N. Courthouse Road between 14th and 15th Streets to allow for television truck parking.

Arlington will not be joined tomorrow by Arlington’s neighbor Fairfax County, whose clerk, John T. Frey, told RestonNow.com that he would not issue same sex marriage licenses until the court case was “a done deal.” If no stay is ordered, Ferguson said he’s not sure how big of a crowd to expect in his office tomorrow.

“We have redeployed staff from other sections of the office and will do our best to serve people as promptly as possible,” he said. “It is hard to estimate how many couples might request licenses. We have an overflow room for people to wait that is comfortable. I am guessing it will be a festive atmosphere with couples visiting with other couples who are waiting.”

Despite the planning, there’s a chance it could all be for naught, at least for a while.

Following the ruling of the 4th Circuit Court of Appeals last week that same sex marriages could begin first thing Thursday morning, state Attorney General Mark Herring requested a stay from the U.S. Supreme Court until it rules fully on the case to strike down the state’s constitutional amendment ban on same sex marriage.

“A stay is warranted,” Herring said in a press release, “in light of the negative impact on Virginia children, families, and businesses if the Supreme Court eventually rules against marriage equality and forces an unwinding of Virginians’ marriages, adoptions, inheritances, or workplace benefits.”

Chief Justice John Roberts has yet to issue a decision.

Arlington County Board Chairman Jay Fisette married his longtime partner, Bob Rosen, last fall, and told ARLnow.com from his office last week that even he was stunned with how quickly the momentum toward legal same sex marriages has grown.

“The pace of this evolution has been remarkable and rewarding,” Fisette said. “In my view, it’s just a matter of time. There’s now an inevitability around marriage equality, as there should be.”