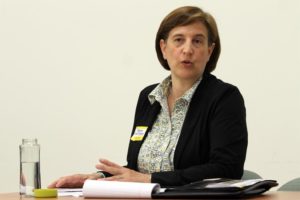 Now down to three members following two resignations, the Arlington School Board is planning to appoint an interim member next month.

Nancy Van Doren, who’s running unopposed to replace Noah Simon on the Board, is being considered for the appointment.

The three remaining members of the Board — Chair James Lander, Vice Chair Emma Violand-Sanchez and Abby Raphael — have approved a process by which Van Doren could be appointed at a special meeting on Friday, Sept. 12 at 8:00 a.m.

“The interim appointment will help to ensure fair and responsive leadership to represent the citizens of Arlington County and to make certain that decisions made during this period of transition reflect support by at least three members of the five-member body,” Arlington Public Schools said in a press release.

Simon resigned from the School Board earlier this summer. Sally Baird, who had already decided not to run for re-election, officially resigned from the Board last week, prompting the remaining three members to consider an interim appointment.

Residents will have a chance to voice their opinions on the appointment during a public hearing at the School Board’s regular meeting on Sept. 4 at 7:30 p.m.

“The public hearing will provide an opportunity for citizens to comment on whether Nancy Van Doren… or any other potential candidate(s), should be appointed,” APS said.

Baird’s seat will remain vacant until the Nov. 4 election, which includes two competing School Board candidates: Democrat Barbara Kanninen and Audrey Clement, who’s affiliated with the Green Party. In May, Van Doren finished second to Kanninen in the Democratic endorsement caucus for that race. After Simon announced his resignation, however, Van Doren was the only candidate to step forward.

Van Doren is a mother of four and an Arlington Public Schools volunteer.