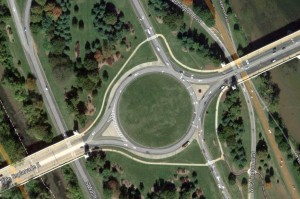 The National Park Service is asking for public input on how to make the GW Parkway’s Memorial Circle area safer.

“The purpose of the [environmental assessment] is to reduce conflicts between trail, walkway and roadway users and to increase overall visitor safety around the memorial area,” Romero said in a statement.

The Park Service installed temporary flashing lights last winter at a crosswalk on the northbound GW Parkway, prior to the circle, to urge drivers to slow down for pedestrians and cyclists. In summer 2012, various other safety improvements — pedestrian warning signs, rumble strips for drivers and directional pavement markings — were installed. 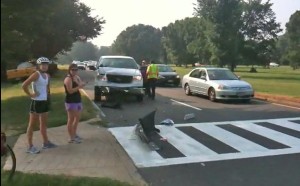 The changes were made in response to a series of accidents and near-misses.

Comments on new safety improvements can be submitted through September 30 on the Park Service’s planning website.

The Park Service asks that commenters include their addresses, phone numbers and email addresses in their remarks, warning that “personal identifying information may be made publicly available at any time.”

Additionally, park staff will set up information booths at Alexandria farmers markets and near Memorial Circle.

The public will have opportunities to review the transportation plan following its release this fall, according to NPS. The Park Service is expected to make a final decision on the plan by the summer of 2016.