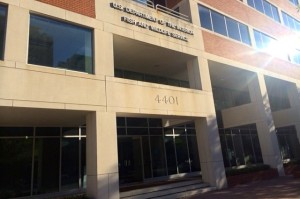 One of three Ballston buildings that served as headquarters for the U.S. Fish and Wildlife Service will remain vacant for months as it undergoes extensive renovations.

Built in 1988, 4401 N. Fairfax Dr. will receive upgrades to its offices, hallways and lobby, according to Jackson Prentice, vice president of developer MRP Realty. The renovations to the eight-story, 144,000-square-foot building will aim to create “open space, with a more modern feel,” he said.

“The whole building will feel brand new,” Prentice said. “The work will bring the building to a better prominence.”

The FWS moved out of 4301, 4401 and 4501 N. Fairfax Dr. in July and August after the General Services Administration announced last September that the headquarters would be moved to Falls Church. Under the government’s base realignment and closure plan, or BRAC, the GSA estimated moving to 5275 Leesburg Pike would save the government more than $3.8 million annually for 15 years, a news release said.

Pre-leasing on 4401 N. Fairfax Dr. has begun, Prentice said, with work expected to be complete by spring or summer 2015.

Representatives for the other two ex-FWS buildings did not immediately respond to inquiries.