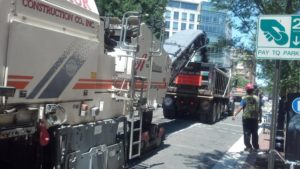 Arlington County could soon be getting an influx of state transportation dollars in the tens of millions.

The Board is expected to request $4.215 million in matching funds from VDOT for the following projects:

The NVTA, which manages the allocation of funds from last year’s HB2313 transportation funding bill, already approved the four projects for which Arlington will receive funding, but NVTA spokeswoman Kala Quintana that the project agreements have recently been reached, and the authority is finally reading to start “mailing some checks.”

The four projects: $12 million toward the Columbia Pike Multimodal Project; $4.3 million for the Boundary Channel Drive interchange; $1.5 million for significant improvements to the Crystal City Multimodal Center on 18th Street S. between Bell and Eads Streets; and $1 million to purchase four buses for the ART 43 route, to mitigate the impacts the Silver Line has had on Blue Line commuters.

“[Arlington] can submit bills for reimbursement once they start turning dirt, purchase the bus, etc.,” Quintana said. “The project list was approved last year but the Authority needed to work with the jurisdictions to create the funding agreements… We are now ready to distribute, or have distributed these dollars. All they have to do is send us the bill and we will send them the money.”

Quintana said the NVTA is beginning work on the next two years of its six-year funding plan, which will distribute an estimated $203 million in FY 2015 funds among all the jurisdictions in Northern Virginia: Arlington, Alexandria, Falls Church, Loudoun County, Prince William County, Fairfax County and the cities of Fairfax, Manassas and Manassas Park.

The NVTA estimates Arlington will receive an additional $11.2 million in direct funding through the transportation package, which is likely to be allocated to its Transportation Capital Fund.