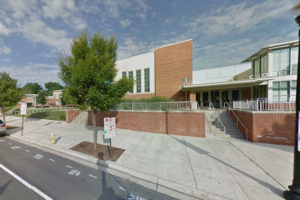 (Updated at 1:10 p.m.) One of the proposals on the table for Arlington Public Schools’ middle school seat expansion plan is moving the H-B Woodlawn program to the Reed School/Westover Library site, a proposal that has caught the ire of many Westover residents.

The Reed/Westover building currently houses the Children’s School — the early education program for young children of APS employees — and the Integration Station, which serves pre-K students with disabilities. The building underwent a $22.5 million renovation in 2009, by far the most recent project of any of the sites APS is considering for expansion.

A group called “Concerned Citizens of Westover” has launched a Change.org petition asking the Arlington School Board to not move the H-B Woodlawn program to the Reed/Westover building. The petition has amassed 973 supporters as of publication.

“The proposed new HB Woodlawn renovation, would build over the recent costly renovation, displacing The Children’s School, the Integration Station, impacting the current Westover Library and farmers market and would reduce/change the green space and fields in Westover,” the petition states.

A recent APS staff presentation suggests that Reed is “underutilized” and may be a suitable location for H-B Woodlawn because it would allow the school to maintain its current size and provide more green space than the Wilson School site.

According to APS staff, the 2009 Reed/Westover renovations were done to allow the building to structurally support future expansion, but expansion was originally planned for an elementary school, considering that Swanson Middle School is about a third of a mile away. Concern about too many students in a two block area of Westover is listed as a “challenge.”

In addition to the petition, Westover residents created a video explaining why they oppose moving the H-B Woodlawn program to the building in their neighborhood. They have also created a video talking about how to “use Reed the right way” (below) — by using it as an elementary school instead of as a secondary school.

The School Board plans to vote on Dec. 18 on which middle school expansion plan to move forward with. The total budget for the 1,300-seat expansion is $126 million, and the Capital Improvement Plan the School Board passed this summer requires those seats to open by September 2019.