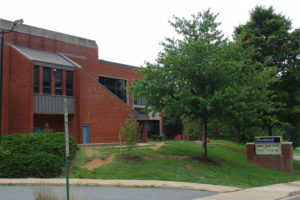 (Updated at 2:45 p.m.) Although a final decision has not been made on where more elementary school seats will go in South Arlington, the options have now been narrowed to two.

First, a plan to build a new elementary school next to Thomas Jefferson Middle School, at 125 S. Old Glebe Road, a project which has come under criticism for its reduction of the green space next to the TJ Community Center.

Second, a plan for building $54 million of expansions onto Barcroft and Randolph elementary schools. The Arlington School Board approved the expansion plan at its meeting last night as the alternative to the TJ plan. Whichever option is built is expected to open by September 2018.

The Board will vote in January on which option it will move forward with. Arlington voters approved $50.25 million toward the new elementary school seat plan on Tuesday as part of the $106 million school bond package.

Arlington Public Schools Assistant Superintendent for Facilities and Operations John Chadwick said last night that there could be measures APS takes to bring the two expansions closer to the $50.25 million budget.

Two parents spoke out last night against the plan to expand Barcroft and Randolph, telling the School Board they should focus expansion efforts on schools that don’t lag far behind the rest of the school system in state testing. School Board member Emma Violand-Sanchez echoed those parents’ concerns, and was the lone vote against the alternative plan.

“When we look at adding more seats, we keep on talking about seats. We’re not talking many times about students,” she said. “We’re not talking about instructional programs and options we have before us. The part of the county where Barcroft sits and Randolph sits, we have serious instruction issues when we have low achievement of Latino, African-American, students with disabilities, low-income students not perfomrming as they should. We have a problem.”

“Barcroft is a wonderful school. Students are achieving, there’s a wonderful staff. Of course we can do more,” she said. “Because of our growing enrollment, our elementary schools are going to reach 725 students, and we’re running out of land. Ideally, we’d love to have a number of very small elementary schools, but we just simply don’t have the land and the money to achieve that.”

The School Board’s “preferred plan” remains building a new elementary school next to TJ, but that plan is opposed by community group Friends of TJ Park. The group says the new school would reduce crucial parkland, including the community garden. TJ Middle School students spoke up at a School Board meeting last month to advocate for keeping the garden. 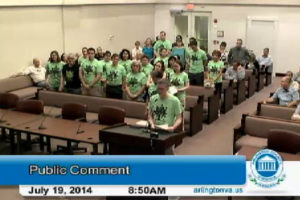 “I am so proud to work in the TJ Garden and seeing it every morning reminds me of how important it is to our community and school in Arlington,” seventh-grader Lucy Robinson said. “If the TJ garden were separated from the school, fewer people would go there and be involved. The TJ community would be hurt by this. Please leave our garden in its current location.”

The TJ plan would add 725 seats with the new school, while the two expansions would add a total of about 500 seats, according to APS estimates. The disparity may make the decision clearer after APS released its new set of student growth projections last night.

APS Director of Facilities Planning Lionel White told the School Board that APS figures to grow by 19 percent, or 4,957 students, in the next five years. According to the district’s projection model, APS will hit 30,000 students in 2020. Because of this growth, APS is considering refining elementary school boundaries for next fall.

Many of the students affected by the school district’s boundary changes will be attending the new elementary school next to Williamsburg Middle School. Last night the School Board approved the school’s name: Discovery Elementary School.

“When you go into successful schools, they use language like ‘discovery’ and ‘creativity’ to spark inspiration in the children,” School Board Chair James Lander said. “The fact that Discovery is the recommended name really pleases me.”