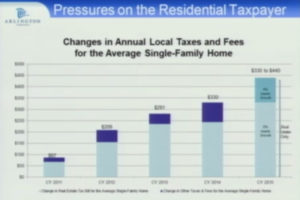 The Arlington County Board says no tax rate increase and no new program expansions should be in next year’s budget.

The County Board approved its annual budget guidance to County Manager Barbara Donnellan yesterday, the framework from which Donnellan will work before she presents her proposed budget to the Board in February. As part of the direction, the Board says Arlington Public Schools should again receive 45.9 percent of county revenue, but County Board Chair Jay Fisette said that number will go up.

“We’re sort of back to where we were in mid-90s,” Cowan said about tax revenue. “Back then, where we were growing was in commercial [growth]… now it’s residential.”

According to the county’s projections, expenditures will outpace revenue based on funding levels from the FY 2015 budget. On the county side, there’s projected to be a $4 million to $6 million funding gap; for Arlington Public Schools, that gap is projected at $20 million.

The chair of APS’ Budget Advisory Council, Moira Forbes, asked the county to increase its funding level to the district, if only to cover the cost of the higher-than-anticipated enrollment growth the schools are experiencing this year.

“While the county of course also is experiencing a lot of pressures and desire for public services because of population growth, the costs associated with new students are immediate, significant, and driven partially by state and federal requirements,” Forbes said. “The Budget Advisory Council suggests that the County Board either increase the revenue sharing percentage or provide a fixed amount to offset half of the $14.1 million in costs [APS is expected to incur] associated with the enrollment growth.”

To help trim costs, the Board asked Donnellan to “eliminate duplication and inefficiencies, and explore further collaborations with Arlington Public Schools as well as regional collaborations and partnerships that might lead to cost savings and efficiencies.”

The Board also directed the manager to provide an alternative option in her recommended budget that would include a 1 percent cut of operating expenditures. In the event that tax revenue exceeds the county’s projections, Donnellan is asked to look at either lowering the tax rate or providing more funding for schools, new facilities and affordable housing — or some combination of the two.

County Board member Libby Garvey suggested postponing the budget guidance until next month to allow the public to comment, but her motion ultimately failed by a 4-1 majority.

“One of the things we could improve in how we engage the public is bringing them in more at the beginning level,” Garvey said. “Having people read this through and think it through… I think that’s helpful.”

Donnellan, when asked, said she hasn’t spoken to her department heads about the FY 2016 budget, and postponing the budget process for a month would make it far more difficult to present a full budget by her February deadline. Fisette and Vice Chair Mary Hynes each said the public had ample opportunity comment on the budget and tax rate later in the process.

“I think we have a good idea of what we would hear,” Hynes said. “This is the box, not the stuff in the box. We will hear a lot from the public about what’s in the box.”