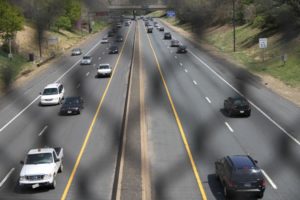 Virginia transportation officials are taking the first step toward a package of big changes to I-66 inside the Beltway.

The announcement follows the I-66 Multimodal Study, which wrapped up last year and presented a number of options for improvements to I-66 inside the Beltway, including high-occupancy toll (HOT) lanes and a third travel lane in each direction. County officials have vehemently opposed widening I-66, and the county successfully sued VDOT to block HOT lanes on I-395.

In a letter to Arlington County Board Chair Jay Fisette today, Virginia Secretary of Transportation Aubrey Layne, Jr. said that the Commonwealth is pursuing a multimodal improvement package that includes converting I-66 to HOT lanes during peak hours. (I-66 is currently HOV-only during rush hour.)

Layne said the Commonwealth will be initiating an environmental assessment as the first step toward pursuing changes. He also said the package would include capacity improvements for Metrorail and buses along the corridor, but did not specify whether a third travel lane is to be added, according to a county spokeswoman.

Arlington is passionate about giving people travel choices. I have just received this letter and have shared it with my Board colleagues and the County Manager. The letter references the I-66 Multimodal Study (inside the beltway) as the basis for any future improvements. It is fair to say that Arlington contributed heavily to that study and largely embraced it. With that in mind, we will consider this new effort and determine how best to constructively respond and engage as a community. We are all concerned about congestion along this vital corridor. It is important to note, however, that whatever changes are made, must enhance all multimodal options – as the I-66 Multimodal Study concluded.