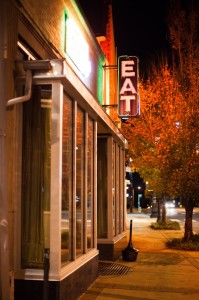 (Updated at 3:15 p.m.) A new barbecue restaurant is coming to the former Tallula and EatBar space in Lyon Park.

A permit has been filed for a new restaurant — “Texas Jack’s Barbecue” — at 2761 Washington Blvd. That’s the former address of Tallula and EatBar, which closed in October after the owner was “unable to reach an agreement with the landlord on renewing Tallula’s lease.”

Texas Jack’s co-owner Steve Roberts talked to ARLnow.com Tuesday afternoon and said he hopes to open the restaurant by April or May. Roberts said Texas Jack’s will be a neighborhood-centric restaurant serving “classic central Texas barbecue.” Roberts noted that he has no plans for making Texas Jack’s a franchise — rather, he and his business partner plan on treating it as their “second home.”

Roberts, a Montana native who describes himself as a restaurant veteran and a long-time Virginia resident, says Texas Jack’s is named after Texas Jack, a famous Virginia-born Texas cowboy who also served as a courier and scout during the Civil War.

Texas Jack’s will be open for lunch, dinner and late night bar service (until 2:00 a.m.). The original Whitey’s bar, used by EatBar, will remain.

Roberts said he an his management team have a “love and a passion for barbecue.” He anticipates utilizing Southern Pride barbecue smokers, which will be in use “all day long.”