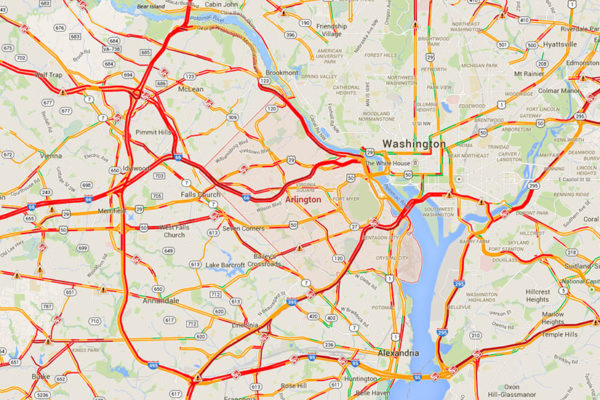 (Updated at 10:25 a.m.) This morning’s commute is officially a traffic nightmare for anyone still out on the roads.

Arlington snow crews so far are only treating primary and secondary roads, not neighborhood streets.

Conditions are bad enough on local roads that we’ve heard of at least one tow truck getting stuck en route to an accident scene An Arlington County Police spokesman, who himself was stuck in heavy traffic having moved only 3 miles in an hour and a half, said officers were doing their best to keep up with all the accidents.

Sternbeck noted that the police department has a normal staffing level this morning.

At least one crossing guard has not been able to make it to her post near Jefferson Middle School, but no police officers are available to replace her, according to scanner traffic. At N. McKinkey Road in 9th Street, medics are responding to a crossing guard who slipped, injured her knee and is lying in the middle of the road.

Students are tweeting ARLnow.com saying their buses are running late or are getting stuck. Others say their school bus never showed up at all.

There have been police reports of school buses getting stuck in various locations, including near Oak Ridge Elementary and on 16th Street S. at S. Taylor Street.

The following roads have been closed by police due to cars getting stuck on hills:

Drivers and residents have been tweeting reports of accidents and stuck vehicles.

At the corner of kirkwood and 13th st off Wash blvd, 3 cars stuck on our hill! @capitalweather @ARLnowDOTcom pic.twitter.com/VYlMSJ79zC

This exemplifies what killed the streetcar in @ArlingtonVA. Planning world class while not providing it. pic.twitter.com/d5EGUrKvp8

CARS CANT GO UP THE HILL ITS STUCK! @ARLnowDOTcom pic.twitter.com/XlT8Dy1Xma

@ARLnowDOTcom art 77 and 16y (and another one) stuck at 6th and courthouse road south.

@ARLnowDOTcom I have kids who take 3 different APS buses – not one showed up this morning. I've declared our own snow day.

@ARLnowDOTcom Our officers are working numerous accidents around the County. Drive slowly and seek alt transportation options, if possible.

We do not recommend parking like this! #snow #accidents pic.twitter.com/PlPWojYYP4

Trash collection is being delayed until later in the day today, according to the Dept. of Environmental Services.

A “ground stop” was in place for flights at Reagan National Airport for part of the morning. As of 8:50 a.m., the airport said the main runway had been treated and “our operations are back to normal.”

While numerous problems have been reported on the roads, at least one bike trail was well-treated this morning.

… WINTER STORM WARNING IN EFFECT UNTIL 1 PM EST THIS AFTERNOON…

THE NATIONAL WEATHER SERVICE IN BALTIMORE MD/WASHINGTON HAS ISSUED A WINTER STORM WARNING FOR SNOW… WHICH IS IN EFFECT UNTIL 1 PM EST THIS AFTERNOON. THE WINTER WEATHER ADVISORY IS NO LONGER IN EFFECT.

* PRECIPITATION TYPE… SNOW… HEAVY AT TIMES.
* ACCUMULATIONS… 4 TO 6 INCHES.
* TIMING… UNTIL 1 PM. THE HEAVIEST SNOW WILL BE THROUGH 11 AM.
* TEMPERATURES… LOW 20S.
* WINDS… VARIABLE 5 MPH.
* IMPACTS… HEAVY SNOW ACCUMULATING ON ALL SURFACES WELL BELOW FREEZING AND VISIBILITY BELOW HALF MILE WILL CONTINUE TO MAKE FOR VERY HAZARDOUS TRAVEL CONDITIONS.

A WINTER STORM WARNING FOR HEAVY SNOW MEANS SEVERE WINTER WEATHER CONDITIONS ARE EXPECTED OR OCCURRING. SIGNIFICANT AMOUNTS OF SNOW ARE FORECAST THAT WILL MAKE TRAVEL DANGEROUS. ONLY TRAVEL IN AN EMERGENCY. IF YOU MUST TRAVEL… KEEP AN EXTRA FLASHLIGHT… FOOD… AND WATER IN YOUR VEHICLE IN CASE OF AN EMERGENCY.