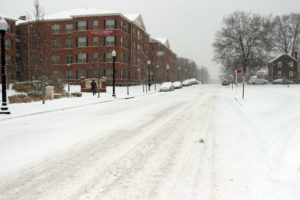 The advisory calls for 1-3 inches of snow in the D.C. metro area, with the flakes starting to fall tomorrow morning and continuing through the afternoon, possibly affecting the evening rush. The heaviest snow is predicted to fall in the late morning and early afternoon.

Although temperatures are hovering in the mid-to-high-40s this afternoon, they’re expected to drop to right around freezing overnight. The weather could prove tricky for morning commutes and school buses.

The Washington Post’s Capital Weather Gang says the 1-3 inch prediction is likely “overdone” but a band of stronger snow in areas is possible.

Arlington Public Schools is not likely to make a decision on a delay or cancellation until early Wednesday morning. The National Weather Service issued a similar winter weather advisory prior to the Jan. 6 snowfall that caused numerous traffic issues, leading APS to issue an apology the next day for not delaying the start of school.

According to the Arlington Dept. of Environmental Services spokeswoman Jessica Baxter, snow crews are on alert, “hooking up trucks today and will be prepared to brine streets early tomorrow morning.”

THE NATIONAL WEATHER SERVICE IN BALTIMORE MD/WASHINGTON HAS ISSUED A WINTER WEATHER ADVISORY FOR SNOW… WHICH IS IN EFFECT FROM 6 AM TO 6 PM EST WEDNESDAY.

* PRECIPITATION TYPE… SNOW.
* ACCUMULATIONS… 1 TO 3 INCHES. LOCALLY HIGHER AMOUNTS POSSIBLE.
* TIMING… SNOW IS EXPECTED TO DEVELOP EARLY WEDNESDAY MORNING… AND CONTINUE THROUGH THE DAYTIME ON WEDNESDAY. THE HEAVIEST SNOW IS EXPECTED FROM LATE MORNING THROUGH MID AFTERNOON.
* TEMPERATURES… IN THE LOWER TO MID 30S.
* WINDS… EAST 5 TO 10 MPH.
* IMPACTS… TEMPERATURES WILL LIKELY BE BELOW FREEZING WEDNESDAY MORNING… ALLOWING SNOW TO ACCUMULATE ON ROADWAYS AND OTHER SURFACES. THIS WILL RESULT IN HAZARDOUS DRIVING CONDITIONS DURING THE MORNING COMMUTE. SLIPPERY CONDITIONS COULD PERSIST INTO THE LATE AFTERNOON.