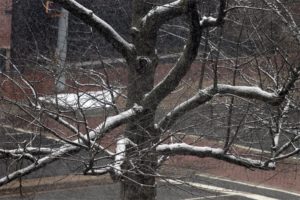 A mixture of rain and snow is falling on Arlington as forecasters warn of a couple of inches of accumulation through Tuesday.

The snow expected in Arlington is nothing compared to the blizzard expected in New York City and other northeastern locales  — which has prompted numerous flight cancellations at Reagan National Airport this morning.

(Students had no such luck — Arlington Public Schools started on time.)

The National Weather Service has issued the following Winter Weather Advisory for the region.

… WINTER WEATHER ADVISORY NOW IN EFFECT UNTIL 10 AM EST TUESDAY…

* PRECIPITATION TYPE… SNOW.
* ACCUMULATIONS… 2 TO 4 INCHES.
* TIMING… SNOW WILL MIX WITH RAIN AT TIMES THROUGH MID-AFTERNOON. PRECIPITATION WILL CHANGE TO ALL SNOW LATE THIS AFTERNOON. THE HEAVIEST SNOW IS EXPECTED TONIGHT BEFORE ENDING TUESDAY MORNING.
* TEMPERATURES… IN THE LOWER 30S.
* WINDS… NORTHEAST 10 TO 15 MPH TODAY… BECOMING NORTH TONIGHT INTO TUESDAY WITH GUSTS AROUND 25 MPH.
* IMPACTS… ROADS WILL BE SNOW COVERED AND SLIPPERY WITH VISIBILITIES BEING REDUCED TO NEAR ONE-QUARTER MILE AT TIMES. THE COMBINATION OF SNOW COVERED ROADS AND LOW VISIBILITY WILL MAKE TRAVELING DANGEROUS

In preparation for the snow, AAA Mid-Atlantic issued a press release urging drivers to be careful on the roads. The automobile association went so far as to admit that “most Washingtonians really don’t know how to drive in the snow.”

… watch out on unplowed side streets in residential areas, and slow down when approaching ramps, culverts, bridges and elevated overpasses, which tend to freeze first and thaw last…

If you are out there, avoid passing snowplows or salt trucks unless it is absolutely safe and necessary. If you have to go, drive in cleared lanes. Changing lanes unnecessarily puts you at greater risk of hitting a patch of ice or large areas of snow between lanes that could easily cause you to lose control of the vehicle.

It is an old joke, but it rings so true. Most Washingtonians really don’t know how to drive in the snow. First of all, if you don’t have to venture out, stay put and delay your commute. If you are a federal worker, stay alert for current operating status announcements from the U.S. Office of Personnel Management (OPM). Secondly, if you must go, reduce your driving speed to a third of your normal pace, and keep your low beams on. Thirdly, give the car ahead of you extra space. Stay at least one car length behind it for every 10 miles per hour on your speedometer, and anticipate turns and possible stops.

Fourthly, be sure to carry a cold weather emergency kit outfitted with jumper cables, first aid kit, a few tools, a shovel, sand, kitty litter, or traction mats, a flashlight with extra batteries, emergency flares or reflectors, and a fully-charged cell phone with a car charger. Then pack some essential supplies including blankets, food, and water to comfort you–and possibly save you–if you’re delayed or stranded in a snowstorm.