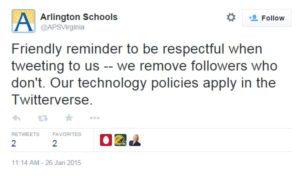 Yesterday @APSVirginia tweeted a “friendly reminder” for those mentioning it in tweets to “be respectful.”

“We remove followers who don’t,” the school system said. “Our technology policies apply in the Twitterverse.”

Via email, school spokesman Frank Bellavia says the tweet was specifically aimed at students who have been complaining about snow cancellation and delay decisions.

“We have had a number of students use inappropriate language or make inappropriate comments on twitter over the last few weeks,” Bellavia said. “This is the second time we have posted this message asking students to be respectful on Twitter or we will block them.”

APS’ internet policy states that student and staff must be courteous, use appropriate language, must not harass or attack others, and must not “view, send, display, or use profanity, obscenities, sexually explicit, or offensive materials.”

Violations of the policy may result in school suspension, but so far APS has apparently just been blocking offenders.

Today, when APS decided on a two hour delay instead of a school cancellation — like Fairfax County Public Schools — students did not seem to heed the warning. 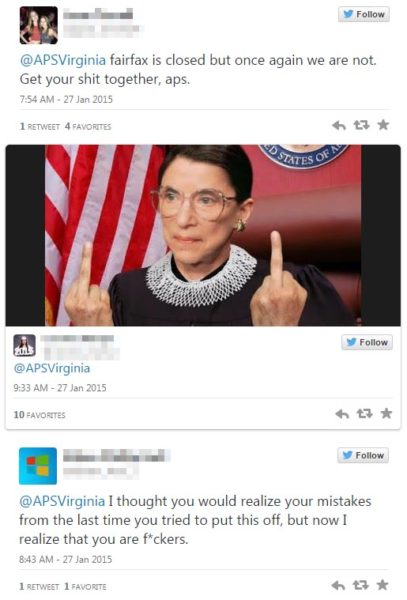 More tweets from this morning, after the jump.

@APSVirginia you guys are selfish, yall are proving why @fcpsnews is the better county

@APSVirginia WOW! another mistake. How many children have to get hit by cars or die on buses to make you realise this mistake

@APSVirginia You make yourself look like the biggest dumbasses.

You guys are worse then Ebola @APSVirginia

@APSVirginia I can't stand you assholes