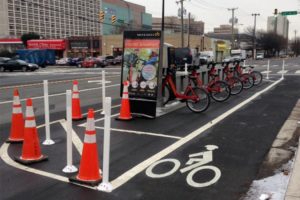 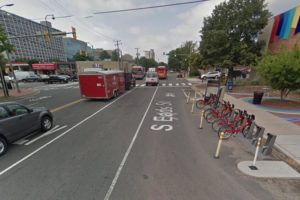 Over on Greater Greater Washington, a mini debate is raging in the comments section about whether this Capital Bikeshare station (pictured, left) in Crystal City is a good idea.

It’s located on S. Eads Street at 23rd Street S, in what was previously a shared bike lane and vehicle travel lane (albeit one with a CaBi station on the side of the road). Now, the lane consists only of a protected bike lane and an in-street Capital Bikeshare station.

In support of the station, some say it has improved safety for cyclists while keeping the station off of the sidewalk. Also, it prevents conflict among drivers when two cars heading straight have to abruptly merge into one lane at the end of the intersection.

Those arguing against the station say it reduces lines of sight, making it harder for drivers to see cyclists and pedestrians crossing the intersection. It also is vulnerable to an errant driver and eliminates a lane used by cars turning onto 23rd Street. Finally, those returning and checking out bikes at the station may come into conflict with those using the bike lane.

Do you like or dislike the placement of the station?