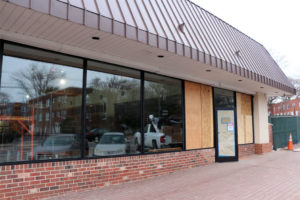 The much-anticipated opening of The Italian Store‘s location in Westover has been pushed back again.

Owner Robert Tramonte told ARLnow.com today that delays in getting utilities installed in the 75-year-old building — water, gas, electric and Verizon FiOS — have been the cause of the delay. Now, he hopes the 6,000-square-foot location on Washington Blvd opens this spring.

“There is no competition for those companies,” Tramonte wrote in an email, “so they schedule as they see fit.”

When Tramonte announced that a second location of his popular grocery/takeout restaurant business would take over the Westover 7-Eleven in December 2013, he planned to open May 2014. Permitting issues held up the start of construction until the summer, when Tramonte said he hoped to be open before the holidays.

Construction was in full swing on the interior when ARLnow.com looked in on the shop this morning. When the new store does open, it will feature a seating area for customers to eat and drink, an expanded grocery section and an Illy espresso bar. Last August, Tramonte described his plans for the location as “The Italian Store on steroids.”