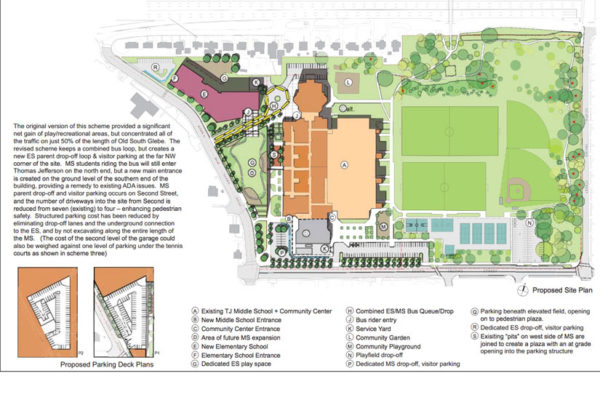 Two weeks ago, the Arlington County Board said “not now” to a planned elementary school next to Thomas Jefferson Middle School.

Opponents of the plan cheered the County Board’s action, saying that plans to build on the TJ site would eliminate land that could later be used as parkland. Arlington Public Schools will now go back and conduct more studies and community engagement in order to figure out how to deal with its capacity crisis in south Arlington.

Supporters of the school plan said delaying the construction of urgently needed school capacity could result in 45 new trailer classrooms next to south Arlington schools by 2018.

While the “Save TJ Park” group that opposed APS’ proposed placement of the school was the most vocal during the lead up to the County Board vote, those who supported the school are now making their voices better heard.

In a letter to the Sun Gazette, Arlington resident Nathan Zee writes that the County Board decision shows that there is “an unquestionable divide” between north and south Arlington.

“The County Board’s direction to APS to keep working with the community until consensus is reached is nothing short of a total absolution of leadership and decision-making responsibility,” Zee writes. “There could always be more planning, but the time to act was now.”

In order to find out (unscientifically) how the community as a whole feels, we’re putting it to a poll: do you support the County Board’s decision?