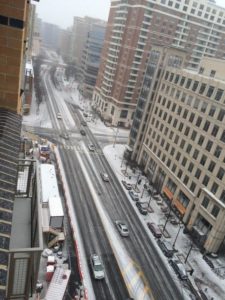 (Updated at 7:30 p.m.) Snowflakes have started flying across Arlington, marking the beginning of what’s expected to be a significant snowstorm.

A Winter Storm Warning is now in effect, with forecasters calling for 6-10 inches of snow through noon tomorrow (Tuesday).

“Snow crews began pre-treating primary and secondary routes earlier today with brine,” according to Arlington Dept. of Environmental Services spokeswoman Shannon Whalen McDaniel. “Most streets had residual brine from Saturday’s event, which will help with the initial snowfall this afternoon. Trucks were also hooked up with plows, chains and spreaders in preparation.”

“We’ll be on full-deployment with approximately 50 trucks until the snow stops tomorrow,” Whalen McDaniel said.

Thanks to frigid temperatures throughout the weekend, snow is sticking on pavement and grassy surfaces. Authorities are asking residents to stay home during the snowstorm, if possible, and plan for treacherous driving conditions in the days following the storm. 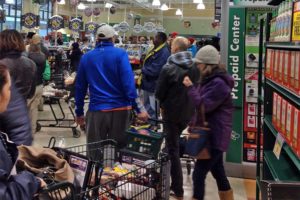 “Virginia State Police is advising all motorists to delay travel plans for tonight and/or Tuesday morning, as roads will be treacherous,” VSP said in a press release. “With the forecasted freezing temperatures, any snow and ice accumulations are expected to stick around for a few days. So it is important to prepare your home, family, and vehicle in advance.”

Long lines are being reported at various Arlington grocery stores. The Harris Teeter at Shirlington, meanwhile, is temporarily closed due to a burst pipe.

MetroAccess service is being suspended as of 6:00 p.m. Monday and will remain suspended Tuesday, according to WMATA. Metrobuses are suspended from 1:00 to 5:00 a.m., then will operate under Metro’s severe snow plan. Metrorail will operate on a Saturday schedule on Tuesday.