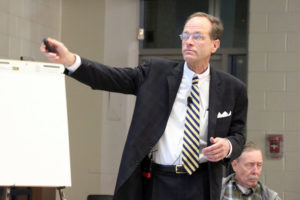 Increasing class size, cutting jobs and deferring a teacher pay raise are all on the table for next school year in Arlington Public Schools Superintendent Patrick Murphy’s proposed FY 2016 budget.

Murphy’s proposal, which he will present to the Arlington School Board tonight (Thursday), calls for a total of $561.1 million of spending, a $21.7 million or 4 percent increase over FY 2015.

With a projected enrollment bump of 1,413 students next fall, Murphy’s budget calls for a $14.6 million spending increase just to handle the increased capacity, plus another $3.2 million to open Discovery Elementary School in north Arlington. Murphy also included $8.1 million in teacher step pay increases, a directive from the School Board.

“There’s nothing new in this budget,” Murphy told ARLnow.com this morning. “The emphasis is around instruction, efficiencies, compensation package among our employees and addressing enrollment to date.”

“I don’t support this,” Murphy said of the tier two cuts, particularly increasing class size, “but this is one of the strategies we’ve had to take.”

The cuts are divided into tiers in case the County Board elects to provide only partial funding toward closing the budget deficit.

The budget also includes $1.7 million for purchasing and outfitting 14 new relocatable classrooms, a number that APS staff anticipates changing before the final budget is approved. Revised enrollment projections for the 2015-2016 school year are expected to be released next month, prompting readjustments across the board in the proposed budget.

Relocatable classrooms, or trailers, as they’re also known, are just one piece of the puzzle for APS in solving its capacity crisis. Murphy said there are no additional measures in his proposal to help relieve south Arlington elementary school overcrowding; that’s a Capital Improvement Plan discussion, he said, which won’t be updated until 2016.

Instead, Murphy said there’s constant discussion about finding space efficiencies with what’s already in place, including changing the way space is used or moving county-wide programs to different buildings. Montessori classes and pre-K programs have already been shifted for capacity reasons, Murphy said.

“There’s been a strong message from my office about how we use our existing capacity, redefining space in buildings,” Murphy said. “We’ve made accommodations for [overcrowded] schools either with relocatables or redesigned space within those buildings.”

The budget plan calls for 196 new full-time positions, but also includes several ways APS can save money without reducing services. Murphy plans to cut APS’ contribution to its post-employment benefits fund by $1.1 million, claiming there’s enough money in the fund to reduce APS’ annual contribution and not negatively impact employees. APS will also likely restructure its summer school, a move that would save $200,000.

There will be four work sessions to discuss Murphy’s budget in the coming month, and a public hearing on March 19. The School Board will then present its proposed budget on April 9, followed by more public hearings before final budget approval on May 7.