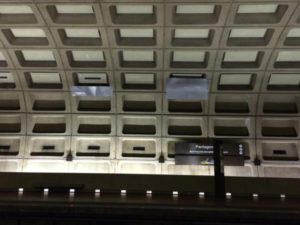 The roof is leaking at the Pentagon City Metro station, and Metro says Arlington County’s road work on S. Hayes Street is to blame.

The Metro tunnel began to leak in the fall because a stormwater-retention system built by the county was overflowing, Metro spokeswoman Caroline Laurin told WUSA9. The county built that system in the median of S. Hayes Street as part of street upgrades for drivers, pedestrians and cyclists.

WMATA has placed pieces of sheet metal where the leaks are occurring, deflecting the water down the wall and away from passengers.

“When that retention pond overflows, water enters our station,” Laurin told the TV station, which first reported the leaks after seeing a tweet from a curious Metro rider. “This temporary solution will be in place until Arlington County can address the issue with the storm water retention structure.”

Arlington’s Dept. of Environmental Services, which oversaw the road construction, said WMATA approved the work it did around the Metro station, and denies that it is to blame for the leaky tunnel.

“It’s not unusual to have leaks in tunnel systems, especially systems like the Pentagon City Metrorail tunnel that are 40 years old,” Katherine Youngbluth, the project manager for the S. Hayes Street improvements, told ARLnow.com in an email. “The rain garden facility that was constructed as part of the County’s Pentagon City Multimodal project (and all other aspects of the project that were adjacent to WMATA facilities) was fully vetted through WMATA’s review and approval process and received a permit for all construction work.”

Youngbluth said the county has known about the leak since the fall, but has only had preliminary talks with WMATA about whose responsibility it is to fix the leak. The county is “continuing to explore technical studies and solutions that are available for an investigation of this type” and doesn’t yet have a timeframe or cost analysis for the repair, she added.