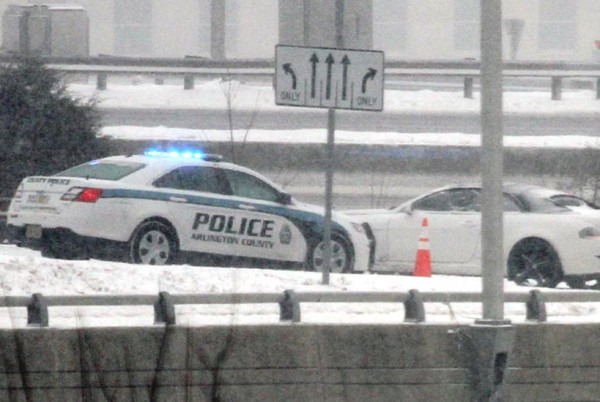 Update at 6:10 p.m. — A Winter Storm Warning has been issued for Arlington and the D.C. area.

.. WINTER STORM WARNING IN EFFECT UNTIL 6 AM EST SUNDAY…

THE NATIONAL WEATHER SERVICE IN BALTIMORE MD/WASHINGTON HAS ISSUED A WINTER STORM WARNING FOR SNOW… SLEET… AND FREEZING RAIN… WHICH IS IN EFFECT UNTIL 6 AM EST SUNDAY. THE WINTER WEATHER ADVISORY IS NO LONGER IN EFFECT.

* PRECIPITATION TYPE… A MIX OF SNOW… SLEET… AND FREEZING RAIN TODAY THROUGH EARLY SUNDAY MORNING.
* ACCUMULATIONS… 4 TO 6 INCHES OF SNOW. ICE ACCUMULATIONS OF A TRACE TO A FEW HUNDREDTHS OF AN INCH.
* TIMING… SNOW WILL CONTINUE INTO THE EARLY EVENING HOURS… CHANGING TO A MIX OF SLEET AND FREEZING RAIN LATE THIS EVENING INTO TONIGHT. PRECIPITATION WILL CHANGE TO RAIN WITH AREAS OF FREEZING RAIN LATE TONIGHT INTO EARLY SUNDAY MORNING.
* TEMPERATURES… HIGHS TODAY IN THE MID TO UPPER 20S… SLOWLY RISING INTO THE LOWER AND MIDDLE 30S TONIGHT.
* WINDS… SOUTH 10 TO 15 MPH.
* IMPACTS… SNOW AND ICE WILL CAUSE HAZARDOUS TRAVELING CONDITIONS THROUGH TONIGHT AND POSSIBLY INTO SUNDAY MORNING.

A WINTER STORM WARNING MEANS SIGNIFICANT AMOUNTS OF SNOW… SLEET… AND ICE ARE EXPECTED OR OCCURRING. THIS WILL MAKE TRAVEL VERY HAZARDOUS OR IMPOSSIBLE.

Several accidents have already been reported around the county during the snowfall. Arlington County is advising residents to stay off the roads “unless absolutely necessary.” 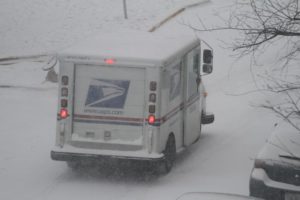 “Roads in Arlington are snow covered and blocked in many areas,” the county said in an Arlington Alert email. Road conditions are also considered to be treacherous. Do not go on the roads unless absolutely necessary.”

Police are shutting down a ramp from eastbound Route 50 to N. Courthouse Road due to especially slippery conditions. Several cars have reportedly gotten stuck on the ramp and the Courthouse Road hill. More problems are being reported at the intersection of Lee Highway and N. Danville Street, and elsewhere.

VDOT is also urging drivers to stay off the roads.

Extremely treacherous out there. Please stay off roads.

People should only be on the roads if it is an extreme emergency.

VDOT says it will have 1,400 trucks clearing snow in Northern Virginia today. It did not pre-treat roads due to low temperatures, which renders road salt ineffective.

Arlington community centers, libraries and schools will all shut down at 1:00 p.m. due to the snow. The Arlington County Board, which has a meeting current in progress, is planning to end its meeting early and defer its last action item until Tuesday.

The National Weather Service has issued a Winter Weather Advisory, calling for 2-4 inches of snow — the Capital Weather Gang says 5 or more inches is possible — before a warm-up that turns the precipitation into sleet, freezing rain and then plain rain.