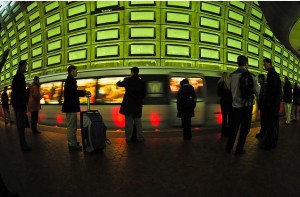 Update at 7:15 p.m. — The smoke is being described as a “maintenance issue.” Fire department units are clearing the scene.

For the second day in a row, Arlington County firefighters are investigating a report of smoke in the Metrorail tunnel between Rosslyn and Foggy Bottom.

No smoke was found in the Rosslyn station upon firefighters’ arrival.

ACFD responded to the Rosslyn Metro station last night (Saturday) for a similar report of fire and smoke, in the same part of the tunnel as tonight’s incident. It was later determined that the fire was extinguished after power was cut to the third rail.

The Blue, Orange and Silver lines are single-tracking between Rosslyn and Foggy Bottom as a result of the incident. No injuries have been reported.