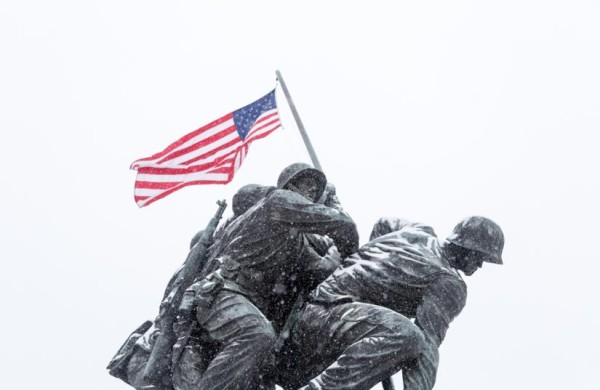 Iwo Jima Anniversary — Today marks the 70th anniversary of the famous photo of Marines raising the flag during on Iwo Jima during World War II. Veterans of the battle gathered at the Marine Corps War Memorial near Rosslyn, which depicts the flag raising, to mark its anniversary last week. [Stars and Stripes]

Impromptu Marriage at Fire Station — A Marine and his fiance got married at Arlington’s Fire Station 5 Saturday night. Firefighters got the call at 6:00 p.m. that the Marine, who was deploying the next day, was in desperate need of a hall after their venue was closed due to broken pipes. Firefighters were able to hastily mop the floor and set up chairs in one of the station’s bays before the bride and groom arrived for the short ceremony. [Facebook]

Man Falls on Tracks at Ballston Metro — Around 8:15 this morning, a man somehow fell onto the outbound tracks at the Ballston Metro station. Bystanders were able to hoist the man back onto the platform. According to scanner traffic, he suffered a head injury.

SUV Rollover Near Columbia Pike — An SUV crashed and rolled onto its side at Walter Reed Drive and 13 Street S., near Columbia Pike, on Friday night. The vehicle’s occupants were unhurt and were able to get out on their own, according to a fire department spokesman. Also Friday night, a pedestrian was struck by a vehicle on N. Glebe Road near Pershing Drive. The victim was transported to Inova Fairfax Hospital with non-life-threatening injuries. [Twitter]

James Hunter Park Cost Infographic — What caused the James Hunter dog park in Clarendon to cost so much? Washingtonian has created an interactive graphic that details some of the park’s features and their price tag. [Washingtonian]

Condo Parking Space Kerfuffle — At Saturday’s County Board meeting, the last item of the day, before the Board adjourned early due to the snowstorm, was a site plan amendment for the Virginia Square Condominiums building. The site plan amendment was proposed by the condo association to try to ameliorate a dispute over the size of two parking spaces. ARLnow.com live tweeted the absurdist theater that followed. [Storify]