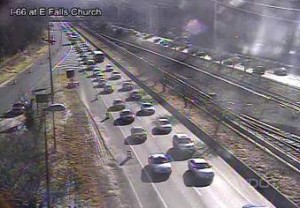 Widening I-66 from Fairfax Drive in Arlington to the Beltway is a future possibility, but not a certainty, under a long-range plan being considered by the National Capital Region Transportation Planning Board.

The body voted last week to include a series of proposals concerning I-66 in an air quality analysis. The planning board will take a final vote on the plan this fall.

The TPB gave a preliminary thumbs up to a VDOT proposal to convert I-66 inside the Beltway to High Occupancy Toll lanes during peak hours, accessible only to buses, cars with three or more occupants, and those willing to pay a toll. The state would continue to own the lanes and would collect the tolls, unlike a proposal for privately-built HOT lanes on I-395 that Arlington County vehemently opposed. The total cost of the project: $350 million.

In the air quality analysis, the TPB also included a proposal to widen I-66 from Fairfax Drive to the Beltway. The widening would potentially take place sometime between 2025 and 2040, but not sooner.

Under an amendment proposed by Arlington County Board member Jay Fisette, the county’s representative on the regional board, VDOT would be required to report on the effectiveness of tolling and other multi-modal improvements before VDOT makes a determination of whether widening — which Arlington has generally opposed — is necessary.

So far, widening I-66 between Fairfax Drive and the Roosevelt Bridge is not under consideration.

Fisette said it’s encouraging that VDOT is considering earmarking toll revenue for various multi-modal improvements along the I-66 corridor — including transit services, bike and pedestrian infrastructure and park-and-ride lots, plus improvements to parallel routes like Route 50 and Lee Highway.

“That is a very significant difference between this HOT lane project and any other one that they have built or proposed,” Fisette said. “That has given our staff some level of comfort that this isn’t just about the road, that it’s about moving people through the corridor. It is our goal to move more people than vehicles.”

Despite the fact that Fisette’s amendment was accepted, he said he abstained from the day’s final vote. He said he will be watching closely as details about the proposed multi-modal improvements are “fleshed out” in the coming months, before deciding how to vote in the fall.

The press release regarding the TPB’s Feb. 18 vote, after the jump.

Members of the National Capital Region Transportation Planning Board (TPB) voted today to include projects–such as proposals to toll portions of I-66 in Virginia and expand the bike lane network in the District of Columbia–in an air quality analysis of the region’s long-range transportation plan. This fall, the TPB will vote on adding these projects to the Financially Constrained Long-Range Transportation Plan (CLRP) once the analysis is completed to determine if the plan meets federal air quality standards.

The Virginia Department of Transportation (VDOT) is proposing to convert I-66 inside the Capital Beltway to a managed Express Lanes facility by 2017, with tolling in both directions during the morning and evening peak periods. Those with three or more people would travel for free. Today, the highway is restricted to vehicles with two or more people during peak periods, but only in the peak direction. The proposal also calls for widening a portion of the highway by 2040 from Fairfax Drive to the Beltway. The cost for the inside-the-Beltway proposal is $350 million.

VDOT is also proposing to reconfigure I-66 for about 25 miles outside the Beltway between I-495 and US Route 15 in Prince William County to have three general-purpose lanes and two managed Express Lanes in each direction by 2022. One Express Lane in each direction would be built new, and the other would come by converting the existing high-occupancy vehicle (HOV) lane. The cost for the outside-the-Beltway proposal is $2-3 billion. The Express Lanes will be tolled at all times with vehicles with three or more people, including buses, traveling for free.

During today’s TPB meeting, officials discussed changes made by VDOT over the past month to the inside-the-Beltway proposal, including greater detail on the transit services on these Express Lanes, improvements to bicycle-pedestrian facilities, park and ride lots, and the implementation of other travel demand management strategies. The Board also sought and received a commitment from VDOT to conduct an evaluation of the effectiveness of the tolling and multimodal improvements prior to widening the highway inside the Beltway.