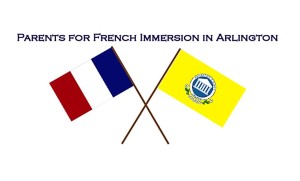 (Updated at 9:55 a.m.) Arlington Public Schools are facing a major capacity crunch, a $13.6 million budget shortfall and the possibility of painful boundary changes within a few years.

In that environment, a group of parents is petitioning Superintendent Dr. Patrick Murphy — for a new language program.

Following a largely successful parent campaign for foreign language classes in elementary schools, now some parents want APS to go one step further and introduce a French immersion program. There’s already two Spanish immersion programs, at Claremont Elementary and Key Elementary, and this group would like to see something similar for Français.

From a MoveOn.org petition the group has started:

We need to expand language opportunities in APS to serve a critical number of francophone residents. Bilingualism increases mental flexibility for children and allows them to perform better in math, problem-solving and logic skills. It helps build self-esteem, creativity, and get a head start in competition for universities and jobs.

Right now, families have to leave Arlington to McLean and MD for French immersion Programs.

So far, the petition has gathered 88 signatures.

In New York City, according to an article linked to on the group’s Facebook page, public schools have three dual-language programs — Spanish, Chinese and French — and the French programs are paid for in part by the French government.