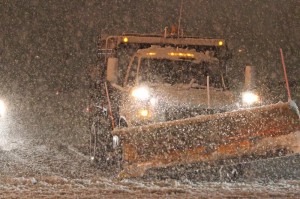 (Updated at 6:00 p.m.) Arlington County has nearly run out of road salt during today’s snow storm.

We hear that county roads crews have been unable to fully treat some treacherous stretches of roadway this afternoon due to the salt shortage, leaving drivers stranded on hills and frustrating police officers trying to reopen roads where there have been accidents.

Jessica Baxter, spokeswoman for the Dept. of Environmental Services, confirmed the salt shortage in an email to ARLnow.com this evening.

It’s been a really rough winter season, not only in our region but across the nation. The County is experiencing end of season low inventory levels of salt. Stock piles from our regional contractor are near depleted. We received mid-season resupply, but it was not enough due to the severity of this winter. We’re doing everything we can to receive additional tons as soon as possible.

Crews are working around the clock and their primary effort will be to plow snow from the streets. We’ll use salt conservatively and supplement with sand.

The problem is apparently impacting some other jurisdictions in the region as well. Additional information from Baxter:

We utilize a regional contract [for salt]. Almost all salt in our region comes from the port of Baltimore. We believe all jurisdictions are working carefully to manage their remaining supply.

Arlington has two salt storage facilities, one north side and one south side. Our maximum capacity is about 8,000 tons. We start the season each year at full capacity and refill during the winter.

About 5-6 inches of snow has fallen on Arlington so far today, with the snowflakes beginning to taper off. The snow has caused numerous accidents, stranded drivers, temporarily blocked roads and even the GW Parkway, and forced businesses to close early.

Due to current weather conditions, Fashion Centre at Pentagon City has closed for the remainder of the day.

Even the snowplows get stuck on my street http://t.co/QbJiwt4Kz8 @capitalweather @arlnowdotcom

@ARLnowDOTcom @capitalweather Buses are having a rough day #arlington Not sure why @wmata is still sending them out. pic.twitter.com/5Ibr3tUP5q

Metro says Metrobus service will be suspended tonight, as the temperature continues to fall, due to icy roads.

IMPORTANT: All Metrobus service will be SUSPENDED at 9 p.m. tonight (Thurs, Mar 5) due to expected icy roads. http://t.co/rlg2lhippW #wmata