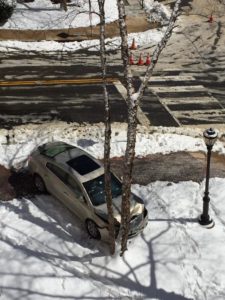 (Updated at 1:00 p.m.) Icy roads are leading to numerous crashes and road closures this morning.

“We’ve already responded to several vehicle accidents this morning,” the Arlington County Fire Department said this morning via Twitter. “Please slow down and use caution.”

Among the accidents reported so far this morning are a car that slammed into a tree near the intersection of 14th Street and N. Veitch Street in Courthouse. The driver was “injured and in shock” after the accident, according to a witness. Another accident, in which a car slid and became stuck on the curb, has been reported at 2nd Street and S. Fillmore Street.

Police are considering shutting down the icy, treacherous hilly portion of 14th Street, where the car slid into a tree. N. Courthouse Road has reportedly been shut down at Route 50 due to similar icy conditions, as has 13th Street at N. Troy Street.

Other reported problem spots include S. Buchanan Street and 9th Street, where several cars have been abandoned, and Wilson Blvd and N. Emerson Street. Even relatively flat portions of main roads are said to be treacherous.

ARLnow.com hears that Arlington is now “out of salt,” after officials said they were running low yesterday evening. We also hear that the county expects a fresh shipment of salt at noon, with the goal of road crews resuming road treatments at 1:00 p.m.

Just after  noon, Arlington County confirmed that more salt was on the way.

Arlington County will receive 2,000 additional tons of salt to help in clearing roads of snow and sleet. The first shipment will arrive today. The County previously received a mid-season resupply, but it was not enough due to the severity of this winter and stock supplies from the regional contractor nearing depletion.

Crews have been working around the clock to plow streets and have used salt conservatively, supplementing with sand. The County is currently clearing residential streets and will continue to do so for the remainder of the day and evening.

Residents should continue to expect hazardous travel conditions, particularly on side streets. Stay off the roads if possible. Cyclists should be extra cautious and on the lookout for accumulated sand on the roads.

Those driving aren’t the only ones experiencing travel woes this morning. The Blue, Orange and Silver lines experienced significant delays after an earlier train malfunction that prompted single-tracking between Rosslyn and Foggy Bottom.

The single-tracking has ended, Metro said shortly before 9:00, but residual delays remain. Riders say platforms, particularly at Rosslyn, are crowded.

@unsuckdcmetro here's Rosslyn on the only platform in service: pic.twitter.com/QnmhOehpBt

After the jump, a warning about icy roads today and later tonight from VDOT.

Continue to delay trips, at least until the afternoon today, says the Virginia Department of Transportation, so that crews can continue to treat icy conditions on all roadways in northern Virginia. Even recently treated interstates and roads that appear to be bare pavement are refreezing quickly with extremely low pavement temperatures.

Crews continue to treat road with mixes of salt, sand and liquid magnesium chloride, however these chemicals are much less effective and work more slowly on road surfaces below 20 degrees.

With pavement temperatures forecasted to remain well below freezing, ice will continue to be a concern throughout the day.

For those who must be on the roads: