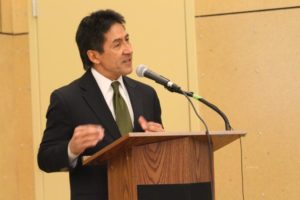 When Arlington County Board member Walter Tejada retires at the end of his term this year, he hopes his replacement represents the same “progressive values” he worked toward in 12 years on the dais.

Tejada is the last member of the County Board who still defends the now-canceled Columbia Pike streetcar “unapologetically and unequivocally.” He has been one of the more vocal supporters of adding affordable housing and providing immigrants safe haven in the county.

“I will never apologize for these efforts,” he told the Arlington County Democratic Committee Wednesday night.

Tejada touted Democratic accomplishments during a 14-minute-long speech, including the county’s triple-AAA bond rating, its low crime and unemployment rates and a host of recognitions as a great place to live. He challenged the criticism that the County Board has ruled with a “groupthink” mentality; he said it’s been a good thing for the county.

“The group-thinking mentality that was created got us to be one of the best communities in the United States,” he said. “And yes, we have some genuine challenges to confront ahead. Yet, some of our problems are first-world problems to tackle. Are we victims of our own success?”

Among Arlington’s problems are a school capacity crisis that seems to grow every year, one that some critics say the County Board and School Board have not acted swiftly enough to fix. The county’s urban corridors are redeveloping with increasing density, in some cases threatening open space and forcing even more tough decisions from county leaders. Then there are rising housing costs, which have prompted Tejada and his Board colleagues to place affordable housing among their chief priorities.

While the county faces these challenges, the voting landscape appears to have shifted to favor “change” candidates. Independent John Vihstadt was elected twice in 2014; Tejada reminded the partisan crowd that Vihstadt “has been named Republican volunteer of the year, who ran on an anti-government agenda and who does not share our Democratic values.”

Tejada expressed concern that Democrats’ reaction to last year’s elections will make them stray from the “progressive and Democratic values” he holds dear; he repeated that phrase a half-dozen times during his remarks.

“What are we, as Democrats, going to do about it,” he asked, “when we allow ourselves to become a new Arlington of rich, entitled people, lacking in compassion, empathy and a sense of community, viscerally opposed to government of any kind, opposed to everything in alleged overspending on every front?”

Tejada and County Board Chair Mary Hynes are both retiring at the end of their terms in December.