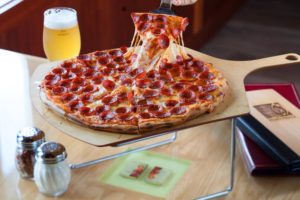 Matchbox, the popular D.C. pizza restaurant, is expected to open a new location in Pentagon City next spring.

The restaurant, noted for its wood-fired pizza and craft beer selection, will be located in the Fashion Centre at Pentagon City, in a yet-to-be-built two-level expansion near the mall’s current S. Hayes Street main entrance.

The new Matchbox will be a whopping 11,000 square feet, with outdoor seating along Hayes Street.

Also expected to open in the spring of 2016 is Sugar Factory, a “famed candy and sweets purveyor.” 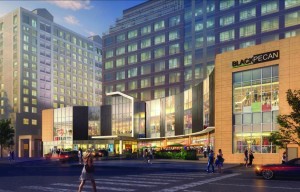 The Sugar Factory location will have both “retail features and an upscale dining area.” The dining area will serve “classic American fare and incredible sweet treats, including the King Kong Sundae, a dessert with a whopping 24 scoops of ice cream, two cupcakes, heaping of toppings, lollipops and sparklers.”

Matchbox is in the midst of an expansion and now has half a dozen locations in D.C., Maryland, Virginia and California. Sugar Factory has stores and restaurants in New York City, Las Vegas, Miami and Orlando.

The full press release, after the jump.

Simon, a leading global retail real estate company, announced today that Fashion Centre at Pentagon City will soon add new resturant offerings as a part of the mall’s ongoing multi-phase renovation and expansion project. Management of the iconic Arlington shopping mall unveiled plans to add Matchbox and Sugar Factory to spaces in the 50,000 square-foot addition, which broke ground in July 2014 and is slated for completion in 2016. Shoppers will soon also have more choices inside the mall with the additions of Life in DC and Pandora. Gymboree has recently opened in a new, fully updated store and Tourneau plans to relocate to a larger storefront.

The highly anticipated expansion and renovation of Fashion Centre at Pentagon City will include a new feature entrance and two levels of new retail shops and restaurants with outdoor seating. Joining the new façade along Hayes Street is DC-favorite Matchbox. Shoppers can relax on the outside patio and enjoy wood-fired pizza, delicious appetizers and craft beer in the restaurant’s new 11,000 square-foot location, set to open spring 2016.

Adding to the center’s sit down dining options, the famed candy and sweets purveyor Sugar Factory is also set to open in the expanded space along Hayes Street, with retail features and an upscale dining area. Shoppers can treat themselves to Sugar Factory’s celeb-endorsed Couture Pops, lollipops with jeweled handles, or stay for a meal of classic American fare and incredible sweet treats, including the King Kong Sundae, a dessert with a whopping 24 scoops of ice cream, two cupcakes, heaping of toppings, lollipops and sparklers. Sugar Factory is slated to open in the spring of 2016.

Several changes are underway inside the mall as well. At Pandora, hand-finished, modern designs speak for themselves. The Danish jeweler will provide shoppers with its complete line of charms, bracelets and specialty collections jewelry. Pandora is scheduled to open this summer.

Shoppers traveling to the mall from outside the Beltway can now take home something to help commemorate their trip! Located on the mall’s third level, Life in DC is now open and will offer any and all DC-related merchandise, from t-shirts, sweatshirts and hats to mugs, magnets and postcards.

Several stores are making enhancements to their spaces to offer shoppers an even better experience. Gymboree recently relocated to the third level Nordstrom wing and now features a fully updated interior concept design. The children’s clothing purveyor is now open and features girls and boys clothing and accessories for newborns, toddlers and children.

Famed watch retailer Tourneau plans to move into a new 3,000 square foot space located near Victoria’s Secret on the mall’s ground level. With brands like Rolex, Breitling and Montblanc, shoppers have many high-end options to choose from.