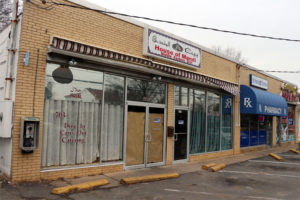 Sultana Grill, the Moroccan restaurant in Bluemont that closed, then reopened, then closed for good last year, could soon be replaced.

Sultana’s sign is gone, and in its place is a sign for “House of Mandi Middle Eastern Grill.” The phone number has been removed from the windows, which are covered in paper.

When Sultana first closed its storefront at 5515 Wilson Blvd, next door to Arlington Pharmacy, some suspected it was due to a lack of any alcohol being served, including beer and wine. When it reopened, the new management dismissed that as the reason. According to our tipster, it closed for good a few months ago.

It’s unclear when House of Mandi will open. It does not have an active application with the state Alcohol Beverage Control Board.