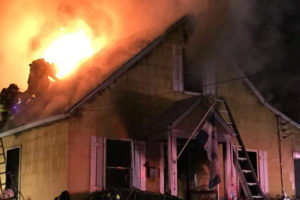 Arlington’s fire stations have been understaffed for too long, Arlington’s fire union says, and after one of the deadliest years from house fires in some time, firefighters are pushing harder than ever for help.

In the past 12 months, five people in Arlington have died from three separate fires. After an early-morning fire in Douglas Park last June, two firefighters had to be sent to the hospital, and a fire in January might have been fatal had the residents of the house in the Old Glebe neighborhood not had an escape plan and working smoke detectors.

Rescue 109, a truck serving the Pentagon City and Columbia Pike area, that transports firefighters to emergency scenes, responded to most, if not all, of those fires. It, along with Tower 104 in the Rosslyn-Ballston corridor, has been operating with three staffers, one less than the national standard for safe operating.

“There is no doubt that without safe staffing levels on ACFD firetrucks, we will continue to see tragedies occur in Arlington County,” the Local 2800 says on its website.

Last year, Local 2800 issued a similar statement, asking for more staffing. At the time, the Arlington County Board had directed County Manager Barbara Donnellan to conduct a review of public safety staffing and incorporate recommendations into her FY 2016 budget. According to ACFD Chief Jim Schwartz, the study is still ongoing.

There are no new firefighters proposed in Donnellan’s FY 2016 budget. Turning Tower 104 and Rescue 109 into four-person trucks would require adding eight full-time equivalent positions, or $1.3 million, the Local 2800 says.

“The staffing study turned out to be a larger project than I think anyone envisioned,” Schwartz told ARLnow.com today. “I am the one who has been pushing the four-person staffing issue for many, many years. It has been a very, very high priority for us. We’ve been through tough budget times that has made it difficult to add fire staff.”

To try to cover the vacancies, the ACFD has applied for a federal Staffing for Adequate Fire & Emergency Response grant. The grant would pay for the positions for two full years, after which Schwartz says the County Board has pledged to assume the ongoing costs.

The ACFD last received a SAFER grant in 2007, and has been denied that last two times it applied. Schwartz said he feels the last two rejections “gives us a leg up this year,” considering the Federal Emergency Management Administration, which awards the grants, likes to “spread the money around.” Schwartz expects to receive a decision on the grant at the end of the summer. 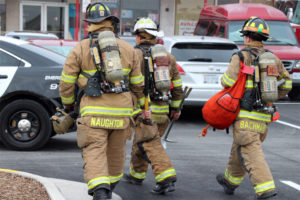 The Local 2800 has been meeting with County Board members this week, proposing it adds between $500,000 and $600,000 to the FY 2016 budget to cover overtime costs and staff the two undermanned trucks.

“This is much cheaper than the 8 FTE option of $1.3 million because it would utilize existing employees and would not incur additional benefits or pension costs,” the Local 2800 leadership told ARLnow.com in a joint statement.

Schwartz said he does not support the Local 2800’s proposal, and added he is already concerned about the amount of overtime his firefighters have been working. The ACFD must have at least 73 people working at all times, and is already forced to keep firefighters for overtime beyond the 56 hours a week they each work.

“On more occasions that I am comfortable with, we have to hold someone on a mandatory basis because we cannot get someone voluntarily to fill the 73 [required on-duty positions],” he said. “I’m concerned about the effect [more overtime] would have on safety. I have great concern about the stress, and the effect extra hours has on performance.”

According to the fire union, the lack of sufficient fire personnel has already led to a hazardous situation. During last March’s house fire in Nauck, the Local 2800 says “a firefighter assigned to Rescue 109 attempted a heroic rescue of two civilians trapped on the second floor of a house fire. While searching for the trapped residents, the firefighter suffered major burns to his body and respiratory tract, requiring a multiple day stay at the Washington Hospital Burn Unit and several months away from work recovering.

“In this situation, only having three firefighters created a difficult, if not impossible task to effect the rescue of the two trapped civilians,” the union leadership continued. “Additionally, had the burned firefighter not been able to self-extricate the house via a ladder, only one other member of Rescue 109 was available to help get him out.”

Schwartz denied that the lack of staffing was to blame for the two deaths in Nauck, saying “I would argue any suggestion that a fourth person on that company would have in any way changed the outcome either to the victims or the firefighter.”

On top of the two understaffed trucks, Schwartz told ARLnow.com ACFD currently has 14 vacancies, from retirements and firefighters leaving the department, that it is looking to fill in the near future.