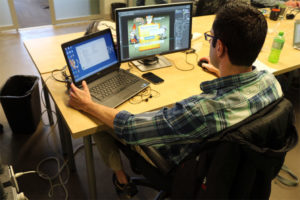 Only a handful of companies are taking advantage of an Arlington tax break intended to help bolster the county’s tech sector.

One possible explanation for the lack of participation in a program that could save companies thousands of dollars a year: many local tech companies say they haven’t heard about it.

Last year, the Arlington County Board approved a measure “to broaden the Technology Zone incentive program for new technology companies.” The action was trumpeted in a press release by then-County Board chair Jay Fisette.

“These updates reflect the reality of a quickly-changing tech world,” Fisette said at the time. “I said that we would lay the groundwork this year for Arlington to become a hub of the innovation economy. This update to our Tech Zones is a big step in the right direction.”

As of March 19, however, only eight businesses had applied and subsequently qualified for “Technology Zone” status for their 2014 taxes, according to Deputy Commissioner of Revenue Ann Bisson. She could not say which companies had qualified nor how much local tax revenue those companies represent.

“Because of the nature of the tech business currently having so few companies applying, I am not allowed by law to give you that information in this case,” Bisson said. “Virginia law prohibits us from giving out any kind of information where it could be determined what one company has in income.”

In order to qualify, a company has to prove that it meets the following requirements:

It’s unclear how many of the current crop of up-and-coming media- and service-oriented tech companies — Uber, Snapchat, Airbnb, Pinterest, Spotify, etc. — would qualify under of that definition.

“The use of computers, telecommunications services, or a web page or internet site shall not, in itself, be sufficient to qualify as a qualified technology business,” according to county code.

For those that do qualify, the savings are significant: the Business, Professional and Occupational License (BPOL) tax rate is reduced from $0.36 for every $100 of a business’ gross receipts, to between $0.18 and $0.10, depending on the size of the company.

“Arlington Economic Development (AED) estimates that the updated incentives would amount to a five-year benefit from about $39,000 for a 20-employee company to $155,000 for an 80-employee company – an average savings of $2.25 per square foot, if applied to annual rent for companies that qualify,” according to the 2014 press release.

ARLnow.com reached out to a number of the Arlington-based tech firms we have profiled for our Startup Monday feature. Of those that responded, most said they would likely qualify for the incentive, but none had heard of it before we reached out.

“Without you pointing it out, I’m not sure we would have figured it out,” said the founder of a Clarendon-based startup, who declined to be identified. “We use an out-of-state accountant and this is a pretty hyper-local set of incentives. We certainly would sign up, now that we know it exists.”

Raymond Rahbar, founder and CEO of UberOffices, which houses at least a dozen local tech startups at its Rosslyn coworking space, said no one has reached out to him or his company about informing its members of the incentive.

Rami Essaid, the founder and CEO of Distil Networks in Ballston, also said he had not been contacted. However, he said incentive program is small potatoes for startups that hope to scale into billion-dollar businesses.

“When you are in hyper growth, you care more about big picture things like being able to continue to scale and not optimizing little things like taxes,” Essaid told ARLnow.com. “That said, Arlington I feel like has done many of the right things to foster an environment for scale. That means having the right talent pool, good community events, etc. The extra tax perks are nice bonuses but they don’t influence our reason for being in Arlington.”

Ironically, despite being an incentive for tech companies, little information about the program can be found on Arlington County’s own website.

There’s a blurb buried deep on AED’s website, but no information about how to apply for it. “Contact Arlington Economic Development for specific details,” the page said.

We couldn’t find anything on Arlington’s Taxes & Payments site. A PDF document on the site, listing business tax rates, does not list the Technology Zone rate. Neither did the paper tax bill mailed by the Commissioner of Revenue’s office. When we asked about it last month, we were referred to the Tech Zone’s section of county code itself. 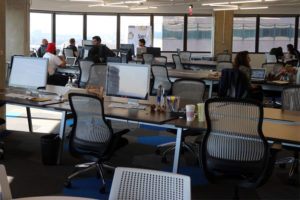 Those who do apply for Technology Zone status are subsequently sent a paper form to fill out.

AED spokeswoman Cara O’Donnell says that the agency has been reaching out to tech companies directly about the program.

“When our Business Investment team is working with a new or expanding tech company, we provide an overview and gather basic information to see if the tech zone incentive is a good fit, and then we give them the application,” O’Donnell said. “That application, in turn, goes directly to the Commissioner of Revenue’s office who evaluates technology zone eligibility.”

“The technology zone was implemented to recruit tech companies that are innovators in the creation and design of hardware and software for this particular incentive,” O’Donnell continued. “The County is dedicated to building the ideal innovation economy and welcoming tech sector businesses in fields ranging from Cybersecurity, Big Data and Clean and Green to Edu-tech, Healthcare IT and the Creative Economy and by focusing on the drivers of innovation in the tech field. Arlington can continue to diversify its business base and build a tech hub. The updated Technology Zone incentives are just what these emerging technology clusters need and solidify Arlington’s resiliency as a world class technology community.”

While small, the number of companies that have qualified for Technology Zone status is actually in line with Arlington Economic Development estimates.

“AED estimates that — with the proposed changes in place — between five and 10 companies per year may qualify for this incentive,” according to a staff report from 2014.

Disclosure: ARLnow.com’s offices are based in UberOffices and the company is an advertiser. ARLnow.com parent Local News Now LLC applied to the technology incentive program as part of the reporting for this story. The company grew its full-time staff by more than 25 percent in 2014 and spent approximately 20 percent of its budget on web design, development and hosting. Our application was rejected.