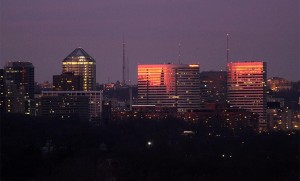 (Updated at 2:20 p.m.) Arlington’s vacancy rate continues to rise, wages and jobs are down, but new Arlington Economic Development Director Victor Hoskins is brimming with optimism.

Hoskins started his new position 10 weeks ago, succeeding the late Terry Holzheimer, who helmed AED for nine years. Hoskins said Arlington didn’t necessarily do anything wrong under Holzheimer and interim director Cindy Richmond, but it could have done more to position itself for the future. The energetic Hoskins decided to quote Wayne Gretzky to make his point.

“You’ve got to be able to go where the puck is going,” he said. “Arlington didn’t do that.”

Because Arlington’s economic development plan was too stagnant and dependent on the federal government, “the bottom dropped out” of the commercial real estate market when the Base Realignment and Closure Act left 3 million square feet of office space vacant. That would leave any jurisdiction in a lurch, but Arlington has yet to recover.

According to AED Deputy Director Alex Iams, the Department of Defense didn’t just leave Arlington, it left some of the hardest buildings to fill in Arlington.

Arlington isn’t just losing office space, it’s losing office workers, too. Total employees in the county were down 1.4 percent in the second quarter of 2014 from the previous year, according to the Virginia Employment Commission; a net loss of 1,841 jobs. Wages also dropped slightly, from a weekly salary of $1,520 in 2013 to $1,511 last year.

Despite these foreboding economic indicators, optimism is high around AED. There are more than 10 million square feet of office space in the development pipeline, including almost 600,000 currently under construction. Arlington’s office costs are cheaper than D.C. and comparable to the other inner suburbs, an AED study found, and the whole region is struggling to gain new tenants to make up for BRAC and sequestration losses. 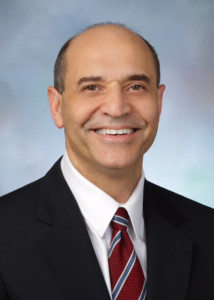 But Hoskins is presenting a plan he calls “The Way Forward” to drag the county out of its commercial real estate doldrums. It includes an aggressive — and expensive — rededication to economic development. Hoskins’ goal: fill 4.5 million square feet of office space in the next three years.

“You have to think a different way or you will lose,” he said. “We are going after the market. We can’t sit here and wait for the market.”

AED forecasts the return on investment from this solution to be 4,000 jobs a year, and $20.6 million in tax revenue.

At 50 percent, Arlington would invest $1.45 million, not offer any incentive fund, instead focusing the money on business development, marketing and tourism promotion.

Hoskins has already made AED more aggressive. He sent Arlington’s first team to the annual SxSW conference in Austin, Texas, targeting the major tech companies and enticing them to move to Arlington. AED hosted a delegation from China looking to invest in the county, and he’s brashly confident about its possibilities.

Hoskins was brought in after serving as the head of economic development in Washington, D.C., where he brokered deals with international companies and tech incubators. He worked for less than a year as the economic development chief in Prince George’s County before being hired at the county, and he has interpreted his mission to change the way Arlington does business.

“The institution has to make a decision to change,” he said. “I believe changes are on the way. I have not gone to a place that did not change. That’s what I bring, but change is bumpy. You’re going to have conflict just because you are trying to get better, and that’s okay.

“We were standing still for a while,” he added. “Now we’re going forward.”