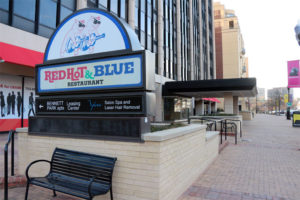 The partners behind A-Town Bar and Grill and Don Tito are planning to open a new restaurant and bar in Rosslyn later this year.

“Barley Mac” is expected to open in the former Red, Hot & Blue space at 1600 Wilson Blvd in Rosslyn by December, co-owner Scott Parker told ARLnow.com Monday. It’s described as a “high-end tavern” that will serve Italian-American fusion cuisine and have a beverage program that emphasizes beer and bourbon.

Barley Mac will target a slightly older customer base than A-Town or Don Tito and will be the partners’ “most restaurant-centric, food-driven” establishment yet, according to Parker.

Parker said he and his partners decided to open Barley Mac because they see Rosslyn as lacking places to eat and have a few drinks after work.

“There’s a market in Rosslyn that’s being underserved served right now,” Parker said. One only needs to look at the crowds at the one-year-old Heavy Seas Alehouse, he said, to see that Rosslyn workers and residents are looking for more places at which to hang out.

“It’s a no-brainer,” said Parker — especially considering the success of the partners’ other Arlington ventures.

At 5,000 square feet, Barley Mac will be slightly smaller than A-Town and about half the size of Don Tito and its three floors. (Don Tito, which opened last month, is far exceeding expectations, Parker noted, while A-Town “continues to do much better than we ever expected.”)

Whereas Don Tito was a “flip” that required relatively simple interior changes, Barley Mac will be “built from scratch” and will thus require months of renovations. The owners are hoping to open as soon as mid-November, though December may be a more likely target.