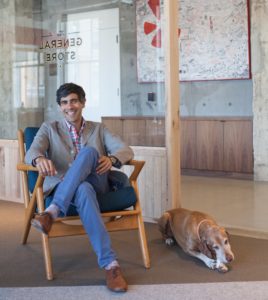 Jeremy Stoppelman, the CEO and co-founder of Yelp, might not have made it as a tech titan if it wasn’t for bike rides to Ballston Common Mall as a kid.

Stoppelman grew up in Arlington, near Military Road. He attended Taylor Elementary in the 1980s and swam on the Donaldson Run swim team. Though Stoppelman and his family later moved to Great Falls, where he attended Langley High School, it was those early days in Arlington that set him on the path to Silicon Valley stardom.

“I used to ride my bike to Ballston mall to buy video games… they had one of those little video game stores,” he told ARLnow.com in a phone interview. “I was always interested in technology and computers. It probably started early with my love of video games and fascination with how you build them and the machines they run on.”

After high school Stoppelman attended the University of Illinois, where he graduated with a degree in computer engineering in 1999. He would come back to Northern Virginia to intern at UUNET, an early commercial internet service provider, for two summers. After graduation, however, he left the D.C. area behind for the Bay Area, where he would work for @Home Network and Paypal before attending a year of business school and founding Yelp in 2004.

Now 37, Stoppelman is the head of a publicly-traded company, a member of Vanity Fair magazine’s vaunted “New Establishment,” and at last check worth an estimated $222 million. Despite a demanding schedule on the West Coast, he says he’s able to come back to Washington a couple of times a year, sometimes for work — weighing in on legislative issues on Capitol Hill — and sometimes just to visit his mother, who now lives in Reston. (His father died in 1998, according to a San Francisco Chronicle profile.)

Asked about advice he would give to local students hoping for a career in tech, Stoppelman said getting an early start learning computer programming is key. 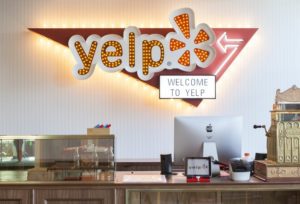 “If your school offers something like a computer science course I would definitely take it,” he said. “Just get going, the more you explore and have fun and just follow your interests, the better.”

Stoppelman himself took a Turbo Pascal programming class in high school. He supports efforts to bring more coding classes to students as early as the elementary school level, including online coding lessons from Code.org and Coursera.

“A deeper understanding of technology is good for everyone,” he said.

With talk of a new tech bubble and an ever-growing list of “unicorns” — startups that have attained the previously-rare valuation of $1 billion — the temptation might be there for young D.C. area entrepreneurs to decamp to Silicon Valley in search of ultra-quick riches. Stoppelman, who guided Yelp’s growth for eight years before taking it public, cautioned against the myth that there’s easy success to be had in tech, particularly in the local space.

“I think in a lot of cases it looks like there’s easy bucks but there’s often an easy story,” he said. “For a lot of companies, the ‘overnight success’ was four or five years in the making, where they struggled with a bunch of different ideas and things that didn’t work and one day they were finally able to get something to click.”

“Doing something in local generally means going deep in a lot of geographies, which takes a freaking long time,” he continued. “So we always had a long-term mentality.”

Stoppelman’s success is a case study in not selling out too early. Shortly after Yelp’s founding, he said he held an “M&A discussion” with Friendster, the early social network that was later overtaken in popularity by Facebook. In 2010, he famously received a phone call from the late Apple founder Steve Jobs, urging him not to sell the company to Google. (He didn’t.)

Such decisions are difficult and aren’t for every company founder, he said.

“It depends on what you want to do and your tolerance for continued risk,” said Stoppelman. “For us, as the opportunity arose to sell, we’d come back to the idea that we were just spreading our wings, just getting started. It didn’t make the decision easy, but it did give us the confidence.”

He added: “I definitely don’t look down at people that got something off the ground and sold quickly, I think it’s a very tough decision and it’s very personal.”

Yelp, by its nature as a review site, can be both a boon to local businesses and the bane of their existence. Businesses with glowing reviews often see a boost in business. But bad reviews can sting and some business owners take them personally. Some have even accused Yelp itself of shady sales practices like offering to hide bad reviews if a business advertises with the site.

Stoppelman, however, sees Yelp as a neutral platform for consumers to share their experiences with other consumers — and for businesses to allow themselves to be discovered by new customers.

“Yelp is word of mouth, brought online and amplified… it’s a big megaphone,” Stoppelman said. “Delighted customers are going to talk to you on Yelp. Before it was hard for some people to know you exist.”

He said businesses can use the negative reviews to improve their business and to try to make things right with dissatisfied customers who might have otherwise simply never returned. He also suggested that owners shouldn’t necessarily sweat the couple of negative reviews that might be mixed in with good reviews.

“A lot of folks do make the mistake of taking an individual negative review and focusing in on that, and that’s necessarily constructive,” he said. “Don’t focus on just the one negative review, focus on the larger picture.”

“Before Yelp there was no real reliable way to see feedback one way or another. So maybe you had a problem or something that was really irritating your customers and you didn’t necessarily know. Now, for better or for worse, that information is out there and you can do something about it. I think that’s really empowering to local businesses that understand the value of that [information].”

As for what’s next for Yelp, Stoppelman said the company is focused on being a platform for booking services and local transactions. Yelp currently has 15 platform partners, offering everything from hotel bookings to golf tee times to tables at Las Vegas nightclubs. The company also just acquired Eat24, a food delivery app that’s known locally for its cable TV ads featuring Snoop Dogg and Gilbert Gottfried and mean words about kale.

“I’m a fan of kale but that’s been a popular discussion point for kale fans and those who do not like kale… Eat24 sparked an interesting conversation,” Stoppelman said, laughing, when asked about the anti-kale commercials.

Kale aside, Stoppelman also mentioned something new the company just rolled out this month that he’s excited about — that tech-savvy Arlington residents might already be using: an Apple Watch app.