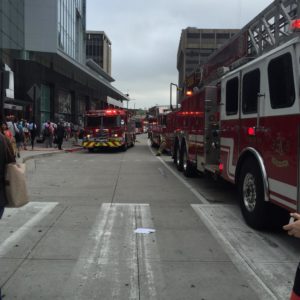 Update at 12:15 p.m. — Service has returned to the Blue, Orange and Silver lines, but trains are single tracking between Clarendon/Arlington Cemetery and Foggy Bottom.

Metrorail service is suspended between Rosslyn and Foggy Bottom due to a reported arcing insulator outside the Foggy Bottom station.

Firefighters were originally called to the Rosslyn station around 8:20 a.m. for a report of smoke in the station.

The station was evacuated but first responders only found a slight odor of smoke, according to Arlington County Fire Department spokesman Lt. Sarah Marchegiani.

Having not found any smoke or fire in Rosslyn, Arlington firefighters are currently scaling back their initially large response. However, Arlington police remain on scene, assisting with crowd control.

Large crowds of commuters seeking alternate means of transportation have been reported outside the Rosslyn station and other Arlington stations along the Orange Line.

Photo: Not sure what is going on at the Rosslyn metro this morning. #metro #rosslyn #rescuesquad http://t.co/4S9cpDFGlq

No more @uber cars will pick up at Clarendon metro. Also @wmata has only sent one bus #dclife pic.twitter.com/sGTnJJdpCI