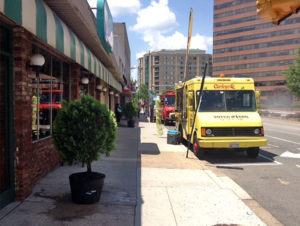 (Updated at 6:30 p.m.) The owners and managers of 12 restaurants centered around the Courthouse Metro station say local food trucks are severely impacting their restaurants.

Alan Beal, COO of Bar Concepts, a restaurant consulting company that recently started working with Summers Restaurant, was the one who called Wednesday’s meeting to order.

“We’re forming a coalition because the food trucks are running amok,” says Beal. “It has a serious financial impact on these brick and mortar restaurants.”

Beal says between three and five food trucks park in front of Summers Restaurant and other Courthouse area eateries each day. Though the trucks are legally allowed to park there for two hours, Beal and other restaurant owners say the trucks sometimes skirt that time limit.

“Parking is free until 8 a.m.,” says Beal. “From 6:30 a.m. to 8:30 a.m., food trucks will send cars to the Courthouse area to park in all the spots in front of these restaurants and wait for the food trucks to show up.”

“It just wasn’t feasible,” says Abaza. “How can you compete? There’s no control.”

“It’s like, can I stand outside the restaurant next door and sell my empanadas?” Abaza says. “Would I be allowed to do that? Absolutely not. But food trucks can do that to us.”

Despite the recent outcry in Courthouse, this is hardly the first time food trucks have clashed with brick-and-mortar restaurants. In 2012, Rosslyn’s Business Improvement District mulled asking for restrictions on where food trucks could operate. But in 2013, the Arlington County Board went the opposite direction — voting to extend the parking time limit for food trucks from one hour to two hours.

“Our argument is that Arlington County has been listening to the food trucks,” Beal says. “At the end of the day, none of our businesses were approached or represented, and we see the food trucks multiplying.”

“This has been something very common to hear from brick and mortar owners,” says Ruddell-Tabisola. “The underlying myth is that food trucks are somehow harming existing businesses, and it’s just not true.”

Ruddell-Tabisola points to peaceful coexistence of D.C. food trucks and restaurants as proof that brick-and-mortars and trucks can live together in harmony.

“The best case in point for this is Farragut Square in Washington D.C.,” he says. “In the past 2.5 years, four brick and mortar restaurants have opened up there.”

To Ruddell-Tabisola, this isn’t a truck-against-restaurant issue, it’s a simple matter of parking management.

“It’s definitely not just a parking issue,” counters Beal. “I just feel like Courthouse was overlooked. These business owners need to be heard.”

The coalition’s next step is to present its case to the Arlington County Board. Though it hasn’t come up with a final list of grievances and policy requests yet, Abaza says she’d at least like to see restrictions on where food trucks can operate.

At the end of the day, Beal says he doesn’t want to get rid of the trucks. He just wants to level what he sees as lopsided playing field.

“We’re not on the warpath here,” says Beal. “We just have to find a way to coexist.”