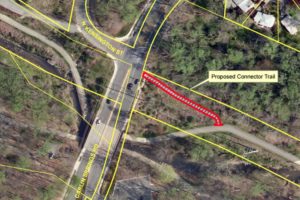 In a somewhat unexpected move, the County Board has voted 4-1 against the creation of a connector path from the Washington and Old Dominion trail to N. Carlin Springs Road.

County Manager Barbara Donnellan and her staff had recommended the Board approve the connection, which would link N. Carlin Springs Road with the W&OD rail trail.

The proposed connector would have been an eight-foot-wide, 220-foot-long trail that could be used by pedestrians and cyclists to reach the W&OD from N. Carlin Springs Road. The county was seeking the permit as part of a partnership with Northern Virginia Regional Parks Authority.

The path is currently what County Board member Jay Fisette called a “cow path,” meaning it is a dirt path stomped down by trail users going to and from Carlin Springs Road.

However, Fisette, who is an avid cyclist, said that paving the path would be unnecessary and encourage cyclists to cross Carlin Springs Road, he said is more dangerous than using an already-established path that’s not too far away.

“I’m going to argue, unless you tell me I’m missing something, that this proposed connector is essentially unnecessary to be paved,” Fisette said.

People can still use the path as a walking path, Fisette said, but he did not see the need to pave it for cyclists.

Board members were not the only Arlington residents against by the potential paved trail. Residents attended the meeting to speak out against paving the path due to environmental concerns.

Buckingham Community Civic Association President Bernie Berne told the Board that paving the proposed path would harm the plant life that existed in the meadow where the pavement would go.

The county had placed chains around the meadow where the footpath was created to block residents from cutting across it and harming the native plants as well as to prevent the county from mowing it too often. If the county had approved the trail, it would have been undoing the county’s efforts to restore the meadow, Berne said.

“The proposed connector trail is a waste of county money,” Berne said.

Instead, the county could use the money to place signs to encourage people away from the meadow and to the existing path, Board Vice Chairman Walter Tejada said.

Tejada, a self-described bicycle fanatic, also failed to see the reason to pave the path because it was so close to the already established connection from Four Mile Run.

“If we are looking for access for both the east and west side of Carlin Springs, we already have it,” Tejada said, calling the proposed path “redundant.”

“If it’s a matter of convenience, I don’t buy it,” Tejada said. “Because it’s just a matter of going around and you are already there.”

Via Twitter, however, former Arlington County Commuter Services Bureau Chief Chris Hamilton criticized the decision, suggesting that the County Board gave in too easily to a few vocal opponents.

Board votes against W&OD Trail Connector, saves "Meadow" http://t.co/JvccbqTQU6 Elected leaders must back up their DOTs and resist NIMBYS!