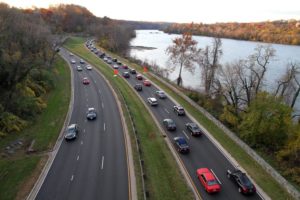 “Enough is enough,” AAA Mid-Atlantic said in a statement this afternoon, after the morning rush hour closure of the northbound GW Parkway.

The northbound lanes of the parkway were closed just past the Spout Run Parkway after a tour bus engine exploded and leaked oil and diesel fuel on the roadway — at 9:30 last night.

One lane opened reopened just before 1:00 p.m. as crews continue to try to clean up the second lane.

The auto association said the National Park Service, which manages the parkway, is either too underfunded or too inept to effectively run a major commuter route. In a statement, below, AAA says today’s closure and the recent lane closures on the corroding Memorial Bridge demonstrate the park service’s “inability to appropriately manage transportation facilities under its control.”

Enough is enough. Today we have had yet another transportation travesty in our region via the National Park Service (NPS) and its inability to appropriately manage transportation facilities under its control. The closure of the GW Parkway northbound for over 12 hours–through the morning rush–as a result of a crash that happened around 9:30 pm the night before is outrageous and cost tens of thousands of commuters this morning untold hours caught in congestion, as commuters jam packed alternative routes. This fiasco comes only weeks after restrictions were placed on the NPS operated Memorial Bridge because of a failure to properly maintain the structure. This is not a new problem for NPS and its roadways. In 1997, AAA led an effort with local members of Congress to force the NPS to barrier separate the traffic flows on the GW Parkway to end a series of head-on collisions that had taken several lives. We are sure that for today’s outrageous and unnecessary disruption of this morning’s rush, the NPS will once again plead inadequate funding.”

It is time for Congress to either appropriately fund the Park Service’s transportation needs, or get the NPS out of the transportation business. Major unnecessary disruptions to an already over-taxed transportation network that already has some of the nation’s most congested arteries must be avoided. In a region that is currently discussing the need for more Potomac River crossings, having to limit the ones we have because of neglect is unacceptable. In an area that needs more rush hour capacity, closing half of a major commuter artery during morning rush-hour because of poor incident management of a crash that happened the night before is unacceptable. AAA Mid-Atlantic calls upon our regional Congressional delegation to find a prudent solution to the repetitive and costly transportation failures of the NPS in the Washington Metro area.