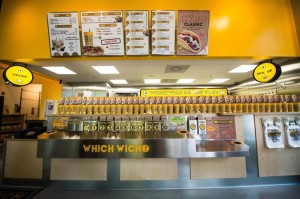 Which Wich Superior Sandwiches is planning to open its second Arlington location in the Fashion Centre at Pentagon City this summer.

The eatery is noted for its selection — it offers over 50 sandwich varieties and more than 60 toppings.

Dallas-based Which Wich has an existing location in Arlington, adjacent to Ballston Common Mall at 4300 Wilson Blvd, and seven other locations in Virginia.

The new sandwich shop within the Pentagon City mall will be owned by a team of two brothers who are gunning to make it the company’s highest-grossing location in the U.S.

“Franchise owners and brothers Faisal and Irfaan Lalani are particularly excited about the expansion opportunity in Pentagon City because with the high traffic in the mall with tourists and commuters, it has the opportunity to be the highest grossing Which Wich location in the country,” said a PR rep. “The brothers have prior business experience, owning over 53 Little Caesar’s locations across the country and employing nearly 1,000 people.”

The restaurant will be located in the mall’s food court and is expected to open in August, we’re told.