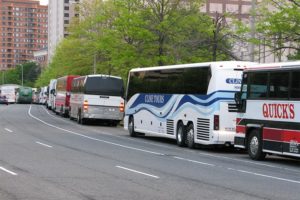 (Updated at 6:45 p.m.) You can now catch a bus to New York mere minutes after scarfing down an Auntie Anne’s pretzel and wading through a sea of middle school tour groups.

Meanwhile, another D.C. to NYC bus line is expected to start running from the mall later this year. Tripper Bus is scheduled to begin serving Pentagon City by the holiday season, according to Ann Bates, a PR rep for the mall.

Tripper Bus currently makes stops in Rosslyn and Bethesda before heading to Manhattan.

This week the mall, which is currently undergoing major renovations, also announced that it is adding a stop for CitySights DC double-decker “hop-on, hop-off” tour buses.