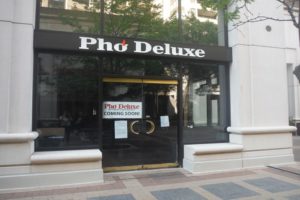 Fourth of July revelers will have another option for dining out this holiday weekend: Vietnamese eatery Pho Deluxe plans to open at 2300 Clarendon Blvd on Sunday, in the space previously vacated by Toscana Grill.

Owners Dan and Hue Nguyen announced plans to open the Courthouse location earlier this year, and now that plan is coming to fruition.

Hostess Michelle Nguyen said that the space required minor renovations, but the bulk of Pho Deluxe’s time and energy was spent redecorating. The restaurant should be ready for business as soon as it passes the fire marshall’s inspection.

Pho Deluxe currently has a sign in the window advertising positions for busboys and waiters. Nguyen says that they are in the midst of conducting interviews right now, and estimates that the new location’s staff is about 80 percent hired.

The Courthouse branch will be the third Pho Deluxe in Virginia; the restaurant also has locations in Tysons Corner and Fairfax. According to Nguyen, there are no current plans for an grand opening celebration.